Crowd not bothered about second encore 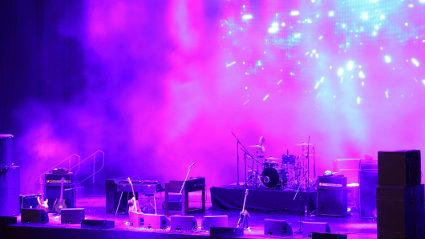 FANS attending a Wombats gig have half-heartedly requested the band return a second time while checking their phones.

The rising cheers, rhythmic clapping and stamping for the first encore have been notably reduced by a crowd who would be just as happy to see the house lights come up.

Stephen Malley of Sheffield said: “I suppose it’s possible that in a few days I could regret not demanding one last song, but right now I feel pretty sated.

“Quite apart from the odour of stale beer beginning to pall, they’ve done everything so it’d be one of the singles we’ve already heard.

“Still I don’t want to be rude and I can see they haven’t unplugged the guitars, so I’ll do a few shouts of ‘MOOOOORRE!’ for their sake.”

The tradition of the encore dates back to the 19th century when it was a great honour for musicians, but is now often abused with Bruce Springsteen once returning for 117 encores, ending days after the last audience members had left.

CELEBRITIES are so detached from everyday life they are landing their planes wherever they want, experts have claimed.

Harrison Ford became the latest millionaire superstar to land a plane in a public space, sending dozens of Los Angeles golfers running for their lives.

Ford then got out of the plane and went for lunch in a nearby restaurant. According to eyewitnesses, he waved to his terrified victims ‘as if they were pleased to see him’.

When he returned to the aircraft, a member of the public approached him shouting ‘you total maniac’, at which point Ford said ‘thank you’ and that he was ‘sure the new Star Wars film would be terrific’.

Martin Bishop, author of Celebrity Pilots Will Kill Us All, said: “They see everything as their personal airport. Howard Hughes used to fly his planes into people’s kitchens and then demand a cup of coffee and a biscuit.