A FATHER-OF-TWO has performed the entire solo from Guns N’ Roses’ November Rain while driving his children to school, they have confirmed.

Martin Bishop, aged 45, was amazingly able to simulate the sound of a Gibson Les Paul played by one of the world’s leading rock guitarists using only his mouth.

Son Andrew said: “When the vocal ended we thought dad would stop. But that was just the beginning.

“Incredibly, using a combination of ‘dueeow’ and ‘neyooow’ noises, he recreated the entire thing without missing a single note.

“And that isn’t the limit of his repertoire. Apparently he can do Hotel California, Shine On You Crazy Diamond, and ‘that Muse one with the guitar solo, you know it’.

“We were absolutely dumbfounded by his skill, and left the car without saying a single word, shaking our heads in disbelief.” 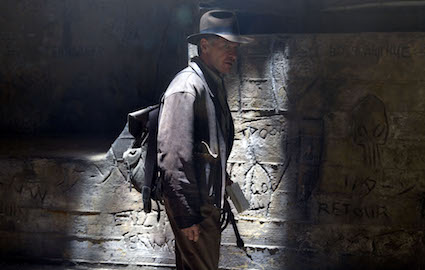 ADVENTURING archaeologist Indiana Jones is finding it impossible to navigate the Universal Credit system, he has admitted.

Forced to sign on after losing his position as a university lecturer, Jones has been battling through the impenetrable forms and appointments to reach the ultimate goal of the benefits he is legally entitled to.

He said: “Compared to making your way through the automated Universal Credit hotline, deciphering Khitan scripts to find the lost treasures of the Liao dynasty was an absolute piece of piss.

“I put in my claim six weeks ago. My landlord’s banging the door down and I’ve had to take my whip down Cash Converters just to keep the electricity on.

“Also you have to do everything online now. I’m fine with implausibly complex ancient traps and surviving atomic blasts, but I’ve never got the hang of computers.

“They’ve got me applying for 12 jobs a week. It’s not realistic, and I say that as someone who’s regularly dragged themselves into the back of a moving truck before throwing a Nazi through the windscreen.”

Jones later received a letter from the DWP saying he was eligible for a budgeting advance loan as long as he collected it before 4.30pm from a pit full of deadly snakes.