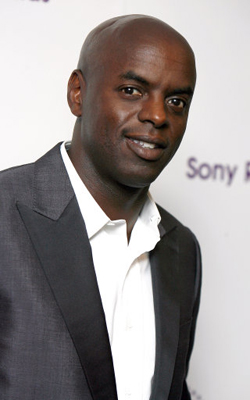 TREVOR Nelson is to be offered as a permanent commentary option for all BBC programmes.

Following Nelson’s stint saying whatever came into his head during the Olympics opening ceremony, viewers will soon be able to hear the DJ describing the images drifting across his frontal lobe as an accompaniment to any BBC output.

“Whether its asking where he can get a kettle like the one thats on Eastenders or saying how much hes scared of bees during a wildlife program, Trevor will be able to bring a uniquely personal perspective to any program.

It will be particularly exciting during quiz shows, as viewers try to answer the questions at home while Trevor shouts out the names of different pieces of fruit.

The 48-year-old iPod shuffle, awarded the MBE in 2007 for services to bigging up Britains posses, will become a permanent resident of the BBC TV Centre, where he will be intravenously fed a diet of liquidised Monster Munch and value brand orangeade to keep his commentary suitably disjointed and excitable.

Nelson will be the main commentator for the Community Shield match in August between Manchester City and Chelsea, the team he supports when he isn’t plotting the jazz funk revival.

He said: “Its a great honour to be asked to talk about things all day because oh hang on, a button has just fallen off my shirt. I like shirts. Did they used to have them in olden times when they rode horses?

“I stroked a horse once.