Aidan Burley convinced career is back on track

MP AIDAN Burley last night reassured friends that he is still on schedule to be prime minister by 2017.

The Nazi-befriending Tory said he had successfully defused his latest bout of unprovoked racial ghastliness and was ‘quietly confident’ about his chances at the next government reshuffle.

He added: “As an opening gambit I shall tell the prime minster that, while I am flattered, neither education nor the home office really fit with my long-term plan.

“I can’t wait to see his face.

“I will then remind him, gently, that not only did I work as a management consultant, I also have a degree in theology. At that point he will nod thoughtfully, pick up the phone and ask George Osborne to step aside.

“I have great plans for the economy. My first act as chancellor will be to commission a ‘volks-wagen’.

“I also want to introduce a tax break for people who use the term ‘fuzzy-wuzzies’.”

Julian Cook, chief economist at Donnelly-McPartlin, said: “D’you know what? I’m not sure it would make a huge difference.

“The economy is currently being run by a man who believes much the same things as Aidan Burley, though at least has the sense to go on Twitter with the same fake profile he uses to quote Enoch Powell on Daily Telegraph comment threads.

“And at least Burley managed to get through Oxford without being photographed looking like a right fucking nonce.”

Meanwhile, the House of Commons is to create a special backbench for Burley that is so far from the Speaker he will need to send up a flare.

Beach volleyball abandoned after audience hears about the internet 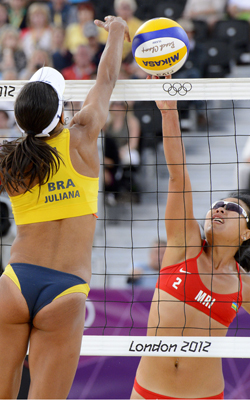 THE Olympics’ main titillation-fest was left deserted yesterday after rumours spread through the crowd of something called the internet, where girls are entirely naked.

Horse Guards Parade had been packed with an almost entirely male crowd who, in an era of unlimited free pornography, were still inexplicably getting their jollies from watching young women playing sports.

44-year-old spectator Tom Logan said: “I couldn’t believe my luck, there I was sitting in the third row, just a few meters from women wearing little stretchy things that show the contours of their lady bits. Cor.

“But when I said as much to one of the security staff, he replied, ‘on the internet, you can see girls that are naked. Actually naked.’ I was like, what is this internet and how I do subscribe?

“I had assumed that sexual mores hadn’t changed since Victorian times. But then I asked a drinks vendor and he concurred that yes, if you electro-browse onto this internet, you can see the lot. Front bottoms, boobies – the works.”

As rumours of the internet spread like wildfire through the audience, hundreds of middle-aged men, many dressed in top hats and carrying canes, abandoned their seats and fled to computers.

Hackney internet cafe owner Bill McKay said: “I was just closing up when about a thousand sweaty, exhausted men who had inexplicably just heard of the internet for the first time turned up saying they wanted to see pictures of ‘lovelies in the buff’.”