Dinner party dominated by analysis of subtext in Paw Patrol

A DINNER party where the majority of guests are parents was dominated by an in-depth analysis of animated rescue dog show Paw Patrol.

Friends at the long-awaited get-together devoted several hours to a vigorous deconstruction of the ubiquitous kids’ show and accompanying toy line.

Stay-at-home father Joseph Turner said: “It’s subtlely satirising capitalist power structures. The proletariat pups do all the work but still have to sleep outside, while ruling-class Ryder commands them to protect the status quo lead from his tower.

“The lack of any parental figure, despite the fact that Ryder is only 10, is an obvious nod to the immature, unchecked power of the elite.”

Fellow literature graduate Susan Traherne agreed: “It reinforces the values of the patriarchy, which is why Skye, the only girl pup, wears pink and has a passive, observing role.”

Other talking points included the parallels between idiotic Mayor Goodway and Donald Trump, and whether bumbling marine biologist Cap’n Turbot represents the demise of academia.

The dinner party’s two childless gave up trying to follow the conversation after 10 minutes and enjoyed a spirited discussion about gigs, drugs and the best sexting emojis. 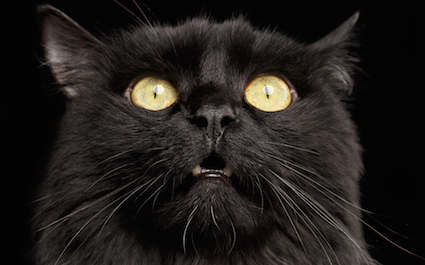 A CAT is incandescent with rage after his finely-honed hunting instincts failed to detect a man walking up behind him.

Black cat Tom Logan was caught off guard by a member of the public during the long, watchful stalking of a pigeon on the road where he lives.

He said: “I was staring intently at a front garden, scanning for prey, but was so focused I had no idea some sneaky six-foot bastard had crept right up behind me.

“It was well out of order. I’m an apex predator with deadly hunting skills – basically a tiger but on a less ostentatious scale – and this guy made me look a right fucking muppet.

“How he managed it I don’t know, my highly-tuned senses give me virtual 360 degree vision. He was dressed in a suit, but he has to be some kind of ninja.”

Logan was vague about how many kills his hunting abilities had resulted in, but said it was ‘loads’ and that mice are ‘a lot harder to take down than you’d think’.

Logan’s owner Donna Sheridan said: “Aw, did something frighten you? Was it that nasty Jack Russell across the road? Come to mummy for a cuddle.”