BOHEMIAN-impersonator Pete Doherty has been inundated with requests for more of his art, especially if it involves an organ.

The latest exhibition from the celebrated hat wearer was declared an immediate hit among collectors of overpriced scabs and people who like the idea of Doherty’s blood pressure plummeting.

Nikki Hollis, an enthusiast, said “I’ve always loved the fresco method of applying the medium directly to plaster and would happily help Pete smear his face across my living room wall.

“And thanks to his constant use of the word ‘Albion’, like some Aldi William Blake, I would like to pay £5,000 to extract a mural out of him for my hallway.”

Doherty’s life and work have often been compared to Charles Baudelaire and Albert Camus by people who do not know who either of these people are but want pale, skinny art school girls to have sex with them.

He said he was inspired to create the works for his current exhibition after a dream he had in which Ray Davies and Pete Shelley promised to break all of his fingers if he ever went near a guitar again.

Art critics are divided, with some denouncing it as the sophomoric dabbling of a bored dilettante while another was arrested with a can of petrol and a box of matches insisting he must ‘purge the world of a junkie’s drip-trays selling for two grand a pop’.

But Hollis urged Doherty to continue, adding: “What I’d really like to see is a collaboration between Pete and Ed Sheeran, with the pair of them pissing blood over the canvas like Jackson Pollock having a seizure.” 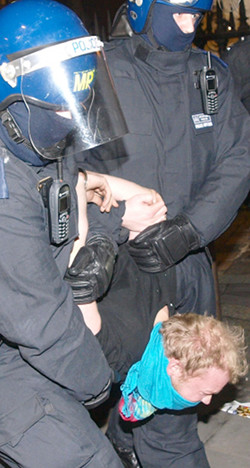 PEOPLE across Britain have applauded the forced removal of smelly hippies who believe exactly the same things as they do.

As police cleared the Occupy London site at St Paul’s Cathedral, millions of people who think bankers are horrid urged police to truncheon the filthy scum who have spent the last 100 days highlighting the horridness of bankers.

Tom Logan, from Hatfield, said: “I don’t know who I hate most – the bank that sent my business to the wall while awarding huge bonuses to its failing management or the human sewage who have been pointing out what a fucking disgrace that is.

“Look at them, with their hair.”

Helen Archer, from Stevenage, added: “Being angry about banks should be done as quietly as possible. Preferably inside one’s own head. If George Osborne could read my thoughts then I suspect things would change overnight.

Margaret Gerving, a retired headmistress from Guildford, said: “Why aren’t the police using a machine gun on that young man who is praying? I thought this was supposed to be a Christian country.

“Would you like to see my feet? They’ve gone blue.”

The clearance of the site means tourists will once again be able to enter St Paul’s and think selectively about Jesus while admiring the underside of a reasonably large dome.