Eight 80s bands that were 80 per cent haircut

IT’S technically impossible for a sound to have a mullet – and yet 80s music persisted. These bands were roughly 4:1 on the haircut to music front:

Venus is still popular today everywhere from dancefloors to razor ads, and Gillette chose the song especially because you can actually hear Bananarama’s stiff, vertical hairsprayed locks in the track’s vocals.

Beloved by teens worldwide, Van Halen’s hair resembled what any 13-year-old boy finds most comforting: his mother. Cut layers into shoulder-length, chestnut hair and you’re looking at either a young Eddie van Halen or the new head of the PTA.

Kajagoogoo believed that if you take Bananarama hair, then hack away at it with scissors and dye, it’ll make for songs that are just as beloved and commercially successful, right? What was that one hit they had?

Eventually The Police split, which was obviously going to happen once they stopped having identical looks and admitted Sting’s hair was best. You can’t perform as a unit if you don’t all have flicky bleached blonde ‘dos.

Not even sarcastic: George Michael had a mullet and it looked good. Conspiracy theorists reckon he couldn’t actually sing at all, we were all just so mesmerised by his tresses we never noticed.

The band were actually named after the ‘dur-an, dur-an’ noise of hairdryers desperately trying to tease their hair into anything like the majesty of George Michael’s. Ended up resembling the row of photos in a hairdressers’ window that optimistic customers point to.

Listen to Livin’ On A Prayer and the very riffs themselves tell you it’s by five men with the silhouettes of cocker spaniels after nasty encounters with static electricity.

Collins’s midlife crisis albums powerfully demonstrated that you can be a multi-million selling artist and still it all means nothing because you’re losing your hair. That’s what makes his records so emotionally raw and harrowing. 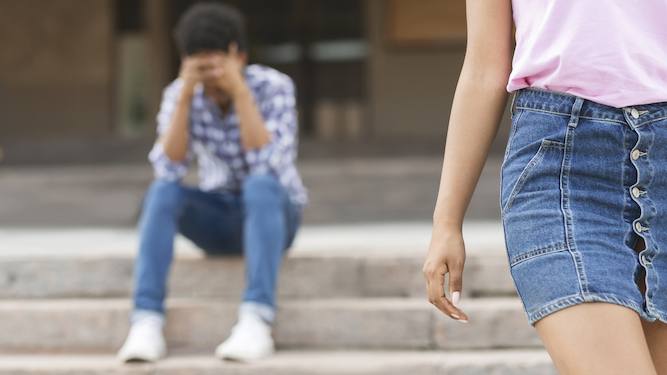 BEEN dumped? Think it was unfair? Maybe it was, or maybe you did one of these seven despicable things:

In bed, out at the pub or merely talking about your day, your partner discovered the terrible truth that has dogged you all your life – you’re dull as f**k. They waited a few months in the hope you’d cheat and give them a good excuse, but you’re too boring.

Everyone lets a few slide, especially foreign words. Who gives a shit if you say ‘chorizo’ with a hard Z? But when you’re referring to the ‘Star Wars try-ology’, ‘satill-ite TV’ and pronouncing ‘aluminium’ like an American? Absolute dealbreaker.

Before you defend yourself, consider your partner’s thought process. ‘F**k that’s annoying. I’m going to listen to that for the rest of my life. It could literally be the last thing I hear unless I act now.’ Understand? Good – now work on yourself. Only have soup in future.

You had shit taste in music

It doesn’t matter if you had your first teenage snog to Westlife or Kings of Leon soundtracked your incredible American roadtrip or Shed Seven are ‘brilliant live’. They’re shit and nobody wants to romance with someone who likes them.

You had annoying relatives

Oh, so you think it’s not your fault that your older sister is a massive racist who kicks pigeons? Well, you share genetic material, so it is. Become estranged from your family or stay single forever, your choice.

Enjoying reality TV isn’t a hallmark of a bad person, but banging on about it as if anything that’s happening hasn’t been carefully scripted and edited is a sign of profound issues. You can’t marry a cretin like that.

Let’s face it, the easiest way to get dumped is by being completely and utterly yourself too early on. You can’t claim it’s unfair when everything about you was wrong.