Every man over 35 still madly in love with Shirley Manson

EVERY man over 35 in Britain would leave his wife and children in a heartbeat to shack up with Shirley Manson, scientists have confirmed.

The Institute of Studies found that every man who grew up in the Britpop era has carried a torch for the Garbage singer since 1995 and did not care who knew it.

Tom Logan, from Stevenage, said: “It’s unlikely, but if I did get a call from her or even an email I would drop everything I was doing and run to her wherever she was.

“And even if it didn’t turn out to be a romantic thing, I’d happily just do her shopping and wash her car.”

He added: “Yes, I am married with three kids but they would understand one day, I’m quite sure. And even if they didn’t, what the hell does it matter?”

The Institute confirmed the other female singers all men over 35 would leave instantly their wives for were Louise Wener from Sleeper, Miki Berenyi from Lush and Sonya Aurora Madan from Echobelly.

Brexit riots ‘would be shittest riots ever’ 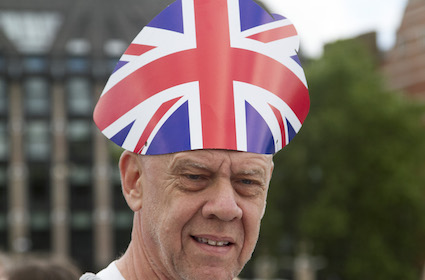 ANY riots caused by Brexit being cancelled or watered down would be extremely poor quality, experts believe.

Civil unrest is likely to be crap due to Brexiters being elderly or unwilling to do more than walk to a polling station for the pathetic satisfaction of telling the EU to bugger off.

Riot policeman Tom Logan said: “We’d probably be administering first aid to rioters who’d given themselves a hernia trying to throw a brick.

“A mass charge by mobility scooters could leave officers with slightly bruised legs, but we could just block their path with police vans until bladder issues forced them to retreat.”

Political analyst Nikki Hollis said: “A problem for any Brexit riot is that many supporters are just internet hard men who’d run a mile from real-life opposition, even it’s just some Guardian-reading ponce.

“A lot were pig-ignorant about what they were voting for anyway, so it’s likely they’ve completely lost interest now the debate has moved on to lots of really tedious, complicated stuff.

“Also, by their very nature, Brexiters are more likely to throw a brick through their own windows.”