LIB Dem leader-in-waiting Sir Vince Cable has unveiled his ‘List of Things That May Never Happen’.

Cable, whom claims he was once a cabinet minister, said the things that may never happen include the Channel 4 version of the Great British Bake Off, an REM reunion, a fifth Indiana Jones film, Brexit and the reappearance of the hair on the top his head.

He told BBC1’s Andrew Marr Reads the Papers: “We’re still waiting for Channel 4 to give us a transmission date for the new Bake Off.

“I suspect something has gone horribly wrong with Pru Leith and the whole thing will have to be scrapped.

“And an REM reunion would be good for Guardian readers, but not necessarily good for Britain. A fifth Indiana Jones film would be – if it’s 100 times better than the fourth one – unbelievably awful.

“The most likely scenario is that my hair will grow back just before I become prime minister.”

You do know that I’m the leader of the Labour Party, Corbyn asks May 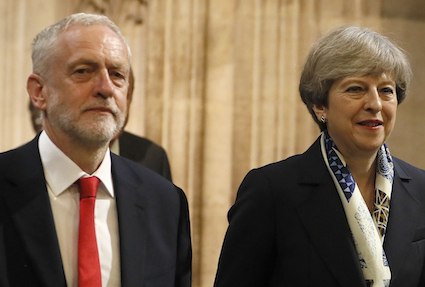 JEREMY Corbyn has responded to Theresa May’s appeal for his help by reminding her that he is the leader of the Labour Party.

As the prime minister called on Corbyn and his MPs to help deliver her policies, Corbyn said: “Come again?”

He added: “Of course, Theresa, whatever you need. I got into politics to help implement the ideas of ruthless, right wing, authoritarian capitalists like yourself.

“Meanwhile, my lifelong support for policies that you find utterly repugnant was actually just performance art.

“In reality I’m a major shareholder in a South African diamond mine and a company that makes bullets.

“Also, I hate homos because Jesus told me to. You utter fucking cretin.”

The prime minister said: “Fair enough. I am just so shit at this. For the love of god, someone stop me.”