A PREGNANT woman who is planning to have a ‘baby shower’ has been reminded this is not America and it is therefore bullshit.

Alice Jones has invited 15 female friends to join her for a Pinterest-inspired afternoon tea with ‘fun’ baby-themed games and a lot of gift-opening.

“This is Swindon. We celebrate a baby’s arrival by reluctantly bringing over a homemade lasagne a few weeks after the trauma of pushing something out of your vag.

“Also, if she’s not drinking, can we? I can’t be around this level of excitement and unalloyed joy without prosecco in me.”

Alice’s mother, Anne Warner, said: “I haven’t got time for all this dicking around. I’ve told her to do what my generation did and approach the due date with dread, flatulence and anger.” 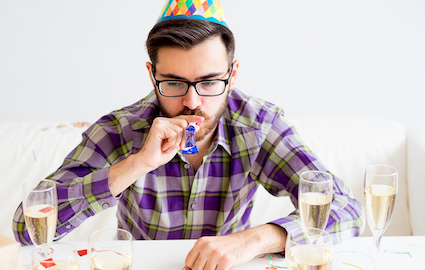 A MAN is so full of himself he believes he deserves a party to celebrate his 44th birthday.

Stephen Malley, from Croydon, has messaged his colleagues, friends and family to ‘check everyone’s free’ on July 23rd, seemingly forgetting he had a 40th birthday party in 2013 and therefore had used up his quota.

Friend Eleanor Shaw said: “I mean, what the fuck? Talk about hubris.

“What kind of egotistical monster thinks 44 is something to celebrate? Worse yet, to force other people to join in?

“Does he not remember his 40th? I was ill, Cassie cried, Chris got food poisoning and Kieran had to leave early because his mother had had a fall. I’ve barely recovered, and now the conceited prick has the nerve to do it again.

“He’s not the god-emperor of Rome. He’s just a man, and he will be brought low and reminded of his place when I say I can’t do that weekend because I’m going camping.”

Malley said: “I’m sure it doesn’t really matter that it doesn’t have a zero at the end. We’ll all have fun!”