Everyone nearly ready to admit Trainspotting 2 was pretty awful

THE general public are just about ready to admit T2 Trainspotting is absolutely shocking, it has been confirmed.

The sequel initially received positive reviews, but only because the world is pretty shit at the minute and it was considered that the public could not handle another let-down.

Martin Bishop said: “Firstly, about 20 per cent of the film is footage from the first film which is something I’ve only ever seen before in Hellraiser 2.

“The plot makes no sense, the actors don’t appear to be even bothering to act and the end is like a Saw film.

“The new ‘choose life’ speech might have worked if instead of saying ‘choose Snapchat’ they said ‘fuck Snapchat’ but alas they did not.

“Also the title is rubbish because ‘T2’ makes you think of either Terminator 2 or some sort of industrial-strength piles ointment.”

“Though I also refuse to admit that I’m 42 and that the 90s aren’t coming back no matter how much I want them to.” 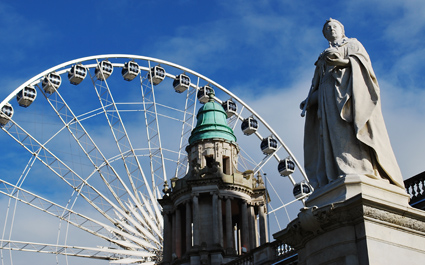 BRITAIN has briefly noticed Northern Ireland before returning its attention to other things.

Northern Ireland was briefly in the news this weekend following some form of election, forcing millions to grudgingly recall its existence.

Bill McKay, from Colchester, said: “I haven’t thought about Northern Ireland in years. Is that where the porridge comes from?

“They can’t be that much of a big deal because I don’t have a stereotyped comedy notion of people from Northern Ireland that involves shagging sheep or whatever.”

Donna Sheridan, from Reading, said: “Northern Ireland is the one that Spain wants, or maybe Argentina. If push came to shove, I reckon I could find it on a map. But why would I do that?

“Anyway, I can’t think about the constitutional fallout from devolved government being suspended, or the implications of a hard Brexit on the peace process, because I have Zumba later.”