Fears for future of music as X-Factor axed

THE greatest era of British music ever known is feared to have ended forever with the cancellation of The X-Factor.

ITV’s legendary music show launched the careers of the most gifted stars Britain has ever known, including Olly Murs, Fleur East and Sam Bailey. Fans are now afraid that a future Rak-Su could go undiscovered.

Music journalist Jules Cook said: “We’ll never know another golden age of British music like this one. The world weeps.

“The 2010 series alone brought us the matchless Matt Cardle, the unforgettable Cher Lloyd, global titans One Direction and the magisterial Wagner. That’s better than every band that came out of the 60s put together.

“Are we really ready to deprive the world of the next JLS or Joe McElderry? Doesn’t the government have a moral duty to subsidise young, exciting artists like Reggie ‘n’ Bollie?

“Without the X-Factor acts will have to hone their craft playing live, write their own songs, and sell themselves on nothing more than their music. It’s like going back to the Dark Ages.”

Are you Wayne Rooney? 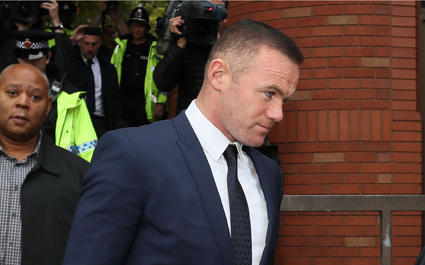 ARE you unsure whether you might be the former England skipper Wayne Rooney? Here are some telltale signs you might be him.

How does a typical night in the pub end?

A) A swift final pint and a kebab on the way home.

B) A weird situation in which you end up in a cheap hotel with three Instagram ‘models’ who you’d kind of like to have sex with but instead you drunkenly fall asleep in an armchair.

Do you frequently forget you’re married with four kids?

A) No, that’s pretty hard to forget.

B) You what? I’m young, free and single… oh, hang on, yeah I do have a wife and four kids.

What is a typical conversation with your partner?

A) Is it my turn to fill the dishwasher?

B) Moving forward, I hope we can put this incident in which nothing happened with the lap dancers behind us.

When did you last see a former girlfriend?

A) At a wedding. I thought it would be awkward but actually we got on fine.

B) On breakfast TV, gleefully explaining how we hooked up while she was working as a prostitute.

What is your job?

B) I go to tacky celebrity nightclubs like Chinawhite. I do some football management too in somewhere called Derby.

A) A wonderful woman called Helen who puts up with all my little annoying habits.

B) F**king furious all the time and looks as if she might punch me.

Mostly As: It’s okay, you’re probably not Wayne Rooney. You can rest easy that there won’t be any kiss-and-tell stories about you in the Sun tomorrow.

Mostly Bs: You are almost certainly Rooney. Have a big lie-down, sleep off your hangover and hope you didn’t do anything bad last night.