GREAT British Bake Off fans will be able to judge the Victoria sponges of strangers under new support schemes.

As the show moves to Channel 4 where it will never be heard from again, self-help groups have sprung up to deal with the loss.

Roy Hobbs said: “We’ll meet in a church hall every Thursday evening to mutter that a woman we’ve never met is a stuck-up bitch whose shortbread looks shit.

“The verger’s wife has just left him and he’s had his hair dyed and bought a motorbike to compensate so we’ve even got our own Paul Hollywood lined up.”

Psychologists say that withdrawal symptoms from the show are linked to the part of the brain that deals with mourning, grief and the desire for cake.

The support groups will raise funds to hire a writer to come up with double-entendres about sogginess and moisture by selling the cakes they make which will in turn be criticised for their sogginess or lack of moisture. 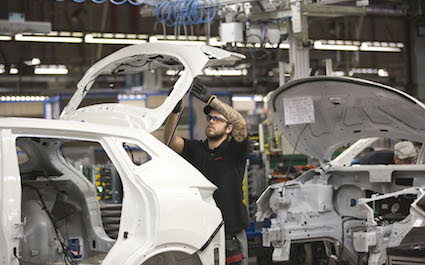 PATRIOTS have hailed the government’s secret Nissan deal as proof that when it comes to allowing multinational businesses to behave as they please, Britain again leads the world.

Theresa May said, “This is a post-Brexit success story: a business based on British soil, creating British jobs for British workers, eating British-made sandwiches and breathing British air.

“The adoption of the pink Power Ranger uniform as mandatory for all residents of Sunderland is a gloriously British gesture of welcome to our Japanese friends, as is my personal promise that any shortfall in profits will be made up by good old British tax.

“This deal is proof, if it were needed, that Britain is in rude health. So much so that hospitals are frankly unnecessary.”