Five classic Britpop hits to weep over during the school run

THERE’S nothing like a bit of Britpop to remind you you’re old now! Here’s an awesome playlist to sob to as you drive the kids to school.

Guaranteed to leave you totally miserable as you remember the days when you were young, hedonistic and edgy – in your own mind anyway – and a hangover didn’t make you want to curl up in a hole in the ground for two days.

Bittersweet tune about young love and unfulfilled dreams, which is the last fucking thing you need when you’re 44 and working for an insurance company. Also a reminder of your undying love for Louise Wener, so after you’ve dropped the kids off you may want to park the car and have a little cry.

Snarky song about pissed Brits in Magaluf with nothing to particularly emotionally trigger you. However it will remind you of when you gormlessly copied Damon Albarn’s retro tracksuit tops and floppy fringe and looked like a considerable bellend, causing embarrassment and possibly nausea.

Supergrass’s big hit was a celebration of youth that actually says ‘We are young’ repeatedly. It also mentions shagging around, having nice teeth and carefree smoking. It’s almost as if the sideburned bastards deliberately intended to bring you down 24 years later.

Scathing take on art school poseurs, but also about university romances. Try not to be so overwhelmed by emotional memories of lost loves and fumbling sex that you accidentally run over one of your kids’ teachers. 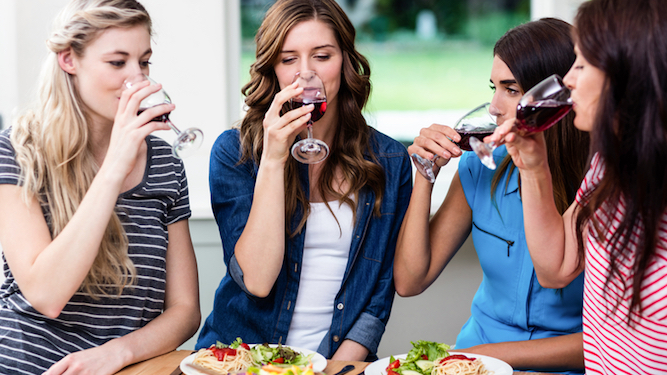 ARE you the sort of middle class drinker who thinks it’s fine to open a bottle of prosecco every Saturday morning for Buck’s Fizz? Here are some other ways to kid yourself.

Feeling the need to buy wine by the case doesn’t become less worrying just because you store it on a special wooden rack in a cool, dark place. Especially if you also have seven bottles of gin in there too.

You buy alcohol specially for cooking

If you throw a couple of bottles of ‘plonk’ into your shopping basket then pour more of it into your gob than your venison ragu, you have a problem. The same goes for taking nips of cooking sherry, which is really just being a tramp with a kitchen.

You never get into a fight

Working class people get drunk and have fights, whereas you never do anything worse than getting a bit arsey on Facebook comments. But it’s probably only being a wimp that stops you getting into fights, because God knows you’d like to wipe Roger’s smile off his face after he became chairman of the Rotary Club instead of you.

You claim to be a connoisseur

Just because you have a special pad where you write down ‘tasting notes’, drinking eight doubles of whisky of an evening isn’t normal behaviour. But then nor is getting excited about a drink that hurts your mouth and tastes of peat.

You say some bollocks about ‘the sun being over the yardarm’

This nautical phrase dates back to when you needed a bucket of rum to forget that life on a sailing ship was utterly shit. However it also calls to mind the days of Empire when insanely bored colonial types felt getting out of bed was the perfect time for the first G&T of the day. So saying it not only makes you a pisshead but also a bellend.