MANY songs are heartfelt tributes to people who’ve inspired you. But what if the losers in your life only inspire boredom and indifference? These tunes all become a bit irrelevant…

You Raise Me Up – Westlife

I am strong, when I am on your shoulders / You raise me up to more than I can be

Who in your life ‘raises you up’? Your boss? He bollocks you for highlighting documents in pink instead of green. Your partner just does everyday partner stuff like loading the dishwasher and sometimes having sex. They’re not Nelson f**king Mandela. Even Westlife’s song is a cover version, suggesting you should play it safe and make money from other people’s talent. Inspirational stuff indeed.

Wind Beneath My Wings – Bette Midler

Did you ever know that you’re my hero? / And everything I would like to be

Bette’s epic could be dedicated to your ever-supportive partner. That’s assuming they’re in any way supportive. And they might be a coward, not a hero. They could even be a high-maintenance bastard who saps your will to live. That’s not really ‘everything I would like to be’.

The most heroic thing anyone’s done for you recently is that stranger who helpfully held a door open for you, and applying it to them feels like excessive praise. Best to just use it sarcastically, eg. for the driver of that BMW that didn’t stop when you were on a pedestrian crossing.

Heroes again. However a hero does not lie inside you. When you see your elderly dad struggling to polish his car you don’t pick up a rag and muck in. It’s boring, you can’t be arsed, and the sneaky old git would just say ‘That’s the spirit’ and f**k off inside.

And that’s not even something particularly heroic. If you were called upon to do something genuinely brave, such as fighting in a war, you’d ‘look inside you’, notice the large number of heroes getting killed, and ‘see the truth’, which is that the army needs admin staff based far away from any fighting.

What have you done today to make you feel proud?

Heather reminds us that making a small change could put us on a path to being a less shit version of ourselves. So really it’s advice to set the bar low. Whether it’s not eating food from the bin, not tutting every time someone asks you a question, or simply not saying ‘burp’ when you burp, you can make a difference today. However, there’s no mention of tomorrow in the song, so if Heather can’t keep up the commitment past today, don’t feel obliged yourself.

I Have Nothing – Whitney Houston

Worryingly, if your partner’s singing Whitney’s sorrowful ballad but not making eye contact or holding your hand they may be talking about someone else.

Adulterer or not, your partner knows that if you walk away, you’ll be back from the pub in a couple of hours like a pissed boomerang wobbling its way home. And she won’t ‘have nothing’ if she doesn’t have you, she’ll have a clean loo, no fear of you saying something embarrassing when people visit, and the cat’s unconditional love and support.

A massive walk to work vs having rights: The argument your brain is having about the strikes 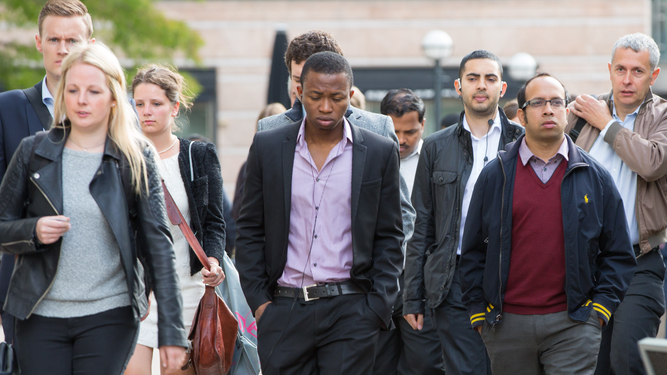 STRIKING for better pay and conditions is vital, but walking four miles to get to work is a huge pain in the arse. How is your brain arguing with itself about the strikes?

I believe in unions. I’m a member of one myself, even though I’m a freelance graphic designer and the one I’ve joined appears to do f**k all. So while I’ve had to get up two hours early to try and get a Tube train today, and I’ve got a hangover, I am fully supportive of the RMT.

But walking to work is shit

Oh for f**k’s sake. I’ve got to spend 90 minutes miserably trudging along a road choked with traffic, just because some train drivers who spend all day sitting on their arses anyway want a bit more cash? I could do their job, even though I can’t even drive a car and don’t know one end of a diesel locomotive from another.

I want to live in a country where all workers are well-paid and work in decent conditions, whether they’re rail workers, teachers or nurses. Yeah, I understand that I’m living in cloud cuckoo land in this bin fire of a country, but we can dream our crazy dreams of a job that pays enough to have a vaguely normal life.

My weekend is ruined

To compound the bitterness I feel at not getting Glastonbury tickets, I now can’t even take the train to my mate Nathan’s house to sit in his living room all weekend drinking cans of lager, smoking spliffs and watching it on the telly in a lame attempt to recreate the magic. Thanks a lot, you Bolshevik bastards.

Anything that pisses off the government is fine by me

Ultimately, despite the inconvenience, I’m fully behind the strikes. Aside from having solidarity with the workers, it has given us all the opportunity to enjoy Mick Lynch tearing various government ministers a new one, and anything that makes Richard Madeley look like the twat he is is fine by me.