MISS a momentous cultural event that rocked the nation by not seeing the Brit Awards last night? Here are the astonishing events we’ll never forget:

Mick Fleetwood and Sam Fox launched the modern Brits by being shit, but they were inept not irritating. Last night Mo Gilligan shouted like Mike Reid on Runaround before doing an impression of Liam Gallagher so painful it gave you the unfamiliar sensation of wanting to see actual Liam Gallagher.

The dire pairings at the Brits are legendary: Olly Murs and Rizzle Kicks, Texas and Method Man, Rihanna and f**king Klaxons. Tonight offered the aural and visual misery of the world’s most basic bitch Ed Sheeran teaming up with metalcore group Bring Me The Horizon. Both emerged lessened.

Madonna tripped over her massive cape at the 2015 Brit Awards, and it rocked. Last night Anne-Marie paid tribute and it was the best bit of her performance as well. Doing away with the songs entirely for tumbling slapstick could up viewing figures.

You know the drill. Nasal singing that’s tune-adjacent at best. Keeping his coat on indoors. Nondescript men with guitars in the background. Boring song. It could be any year since 1998 when Oasis went to shit.

Adele bellows a mid-tempo song about her feelings

Sitting in front of a glittery backdrop like the facade of a Northern nightclub circa 1986, Adele sang ‘I Drink Wine’, the 3,236th song she’s written about her sad, sad feelings. Most Britons are now more in touch with Adele’s feelings than their own. She also won everything, like she needs to. 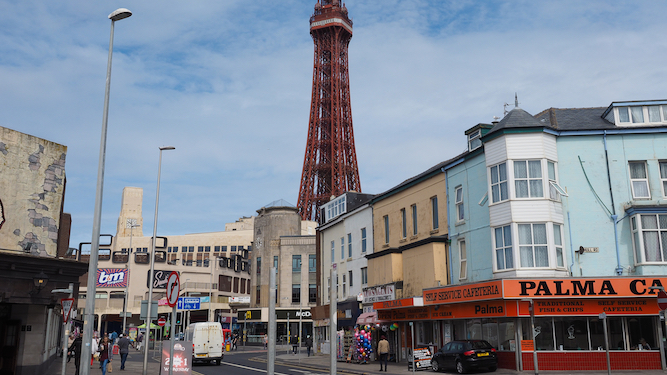 AMERICANS picture Britain as swinging London and quaint little thatched villages. Direct them to these hidden gems and see how they f**king like it:

Position Luton as being to London what Boston is to New York and send Yanks there to enjoy the litter, the air pollution, the position on a flightpath, the town equivalent of a plain ham and no mayo meal deal sandwich. Let them see the misery of ordinary British lives through drizzle. The real us.

Americans already lap up Scottish shit due to Braveheart, so trick them into the depths of Wales to a harbour mentioned in Shakespeare. Promise dragons, legends, and wild Welshmen rapt in song, and instead they’ll witness the glories of post-Thatcher deprivation.

Modern. Ground-breaking. Futuristic. Technically unique, if only in its soullessness. These are words you could use to describe Milton Keynes if you were being held by its mayor at gunpoint. A labyrinth of roundabouts and concealed pedestrian walkways Californians will never escape.

No UK holiday would be complete without a trip to the coast. Tell our English-speaking cousins – accurately – that Blackpool is the quintessential seaside town with piers, illuminations and a famous golf course. They’ll love the boarded-up town of heroin addiction and men fighting seagulls for chips they discover.

It sounds quaint because of its hyphenated name, so why not upsell the city that the Midlands and North-West each try to blame the other for? It might not have Cotswold charm but it’s technically on a river in a place that ends in ‘shire’ so it might as well be Beatrix f**king Potter’s house.