THE producers of Gogglebox have confirmed that the departing Michael family will be replaced with five hooting gibbons.

The family of apes, housed in a spacious semi-detached with flowery wallpaper, will be filmed screeching and throwing faeces at a clips of various popular shows and news stories.

Producer Carolyn Ryan said: Viewers are going to love gibbon patriarch Martin, whos very much the dominant male who hisses and bares his teeth whenever Huw Edwards is on.

Mum Jenny likes to sit close to the screen and pick imaginary mites off Danny Dyer during EastEnders, and the kids spend most of their time swinging around on the light fixtures and screaming.

“Plenty there for your average Gogglebox viewer to identify with.

Martin the gibbon said: Im looking forward to the Downton Christmas special, though it does anger me that my wife submissively offers her inflamed hindquarters whenever Lord Grantham is on screen.

We’re working on our own catchphrase and the favourite so far is WHOOPWHOOPWHOOOOOTWHOOPWHOOOOOOT, which we intend to use while watching Strictly.

If all goes well we’re hoping to work with Attenborough. The guvnor.

If the gibbons prove popular then producers plan to introduce more animal families, with 400,000 termites already lined up to share their thoughts on The Great British Bake-Off.

Establishment planning to bring Russell Brand down with sex scandal 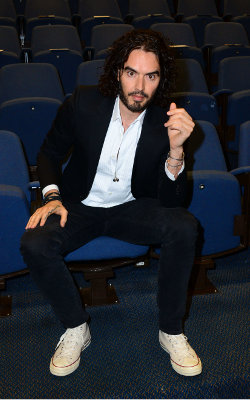 THE security services are planning to discredit Russell Brand by having him caught in an affair with a disreputable young woman.

Masquerading as a respectable family man

The comedians popularity among young people is expected to nosedive when he is exposed as just one more public figure unable to keep it in his trousers.

Our nubile, inviting young agent will pretend her cars broken down by the roadside outside Brands home, bait in a honeytrap he wont be able to resist.

Shell submit herself to his animalistic depredations, recording device hidden in her hatpin activated the whole while, and the following Sunday hes exposed in the newspapers.

His followers, disgusted that their idol is nothing but a slave to his bestial lusts, will soon abandon him in favour of someone more worthy of their respect like former Welsh secretary John Redwood.

If the plan fails, MI5 refuse to rule out planting evidence that will smear Brand as a former drug addict.