RAP music has been exposed as nothing but clever puns, allusions and references like a Radio Four panel game.

Ready to speak for one minute without hesitation, deviation or repetition

The truth about the genre, which has been masquerading as cool since the late 1970s, has been exposed by 62-year-old consultant surgeon Joseph Turner.

He said: “My son was listening to Pusha T, the abrasive self-styled ‘king of the coke flow’.

“I heard the line ‘Reagan era I ran contraband’, which very cleverly links the Iran-Contra scandal to rumours that the CIA supplied crack, and suddenly realised that it was five down in the Financial Times crossword on Monday.

“It turns out this Pusha T character is also Triptolemus, the man who sets the crosswords, and all that guns and drugs stuff is nothing but a cover.”

The rap community is glad to cease living a lie, with Ghostface Killah appearing on Countdown’s Dictionary Corner with Susie Dent, and Nicholas Parsons being replaced by Lil’ Wayne on the renamed Just A Motherfuckin’ Minute.

50 Cent said: “Down in the hood, bustas find out you into alliteration or assonance your ass is in the cold ground.

“One time I got caught on the corner with a Scrabble board. Six fools died that day.” 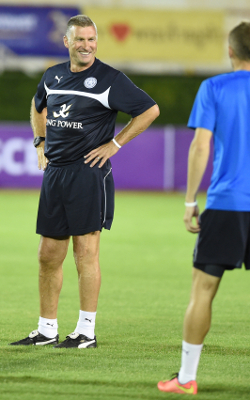 The reality of Pearson has been in doubt ever since his appointment in 2011, with claims he played for Shrewsbury Town, Sheffield Wednesday and Middlesbrough unprovable because nobody can watch those teams.

But the squad say their faith in Pearson remains unshaken, with club captain Wes Morgan describing him as a presence not seen but rather heard, shouting from the touchline of the soul.

He continued: Unbound by mere reality, Nigel lives in the hearts of each and every one of us.

We are unshaken by shouts of Wheres the evidence? or Are you sure you dont mean Stuart Pearce? from the sidelines.

Well stick to hitting the big man, working the channels, and refusing to score, because as Nigel teaches, goals are an abomination.

Pundit Ian Wright said: Believers attribute extraordinary events to Pearson, such as getting promoted or winning 5-3 against Manchester United, but those can be explained by the effects of random chance or Asian betting syndicates.

Some claim to have seen him on Match of the Day, but who is still awake for the last game?