Hollywood 'living in some sort of fantasy world'

HOLLYWOOD’S denial of a link between movie violence and gun murder suggests it may be living in some sort of made-up, fantasy world, experts have claimed.

Research by the Institute for Studies found that more than 90 per cent of actors, directors and producers believed they were living in an entirely separate universe where cause and effect can be whatever they want it to be.

Professor Henry Brubaker said: “It’s almost as if they spend all their time making things up.

“So it means that when something comes along that doesn’t quite fit into their universe they just send to back for a re-write until it makes ‘sense’.”

He added: “For instance, if you watch Quentin Tarantino being interviewed by Krishnan Guru-Murthy about movie violence he is utterly convincing.

“He has written a script in which there is no way he even suspects there is the slightest link between real gun violence and a popular culture that is absolutely and continually drenched in fictional gun violence.

“Also, in the script everyone thinks he is incredibly likeable and not remotely cynical, self-serving and manipulative.”

But liberal activist and star of Gangster Squad, Sean Penn, said it was important to draw a line between fact and fiction, adding: “I always want my performance to be believable, except the bit where I have a gun.

“I don’t want you to believe that bit.”

Kate portrait 'will look very nice on a plate' 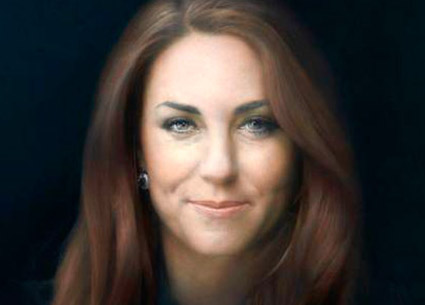 THE Duchess of Cambridge has praised her first official portrait, claiming it would make a lovely commemorative plate.

The portrait, entitled ‘Our Very Special Lady’, was painted by Bill McKay who normally does puppies, kittens and fat little children with massive eyes.

The Duchess said: “That’s really nice. Stick it on plate, bit of frilly, blue ribbon stuff round the edges, coat of arms at the top, £29.99.

“Knock ’em out in China and my parents could shift ’em through their website. Fucking sorted.”