How He Did It: The Secret Behind Derren Brown's Bullshit Explanation

IT'S the question everyone is asking: How did Derren Brown manage to come up with such an obviously bullshit explanation for his tedious lottery trick?

Millions of viewers were stunned by Brown's claim that he got 24 people to think of six numbers each and then worked out the averages to predict the lottery result in a technique known to psychologists and mathematicians as 'automatic bullshitting'.

Dr Tom Logan, a parapsychologist from Reading University, said: "There are a number of techniques one can use to come up with an explanation like this including so-called 'false walls', hypnosis and picking some random words out of a hat.

"But the most common method is simply to assume that everyone is a total fucking moron who will believe anything you tell them as long as you have a mysterious goatee beard and use utterly meaningless phrases like 'wisdom of crowds theory'."

Bill McKay, a TV viewer from Darlington, said: "That explanation was so bad that I actually think he might be Jesus after all and he's just trying to throw us off the scent."

Emma Huddersfield, from Doncaster, added: "There are so many things about the universe we do not truly understand. Like why do I keep watching Channel Four when they haven't made a decent programme since Johnny Vaughan left the Big Breakfast?"

How he did it – the theories:

1) Time delay
There is always a time delay of at least five seconds during live television broadcasts giving Brown just enough time to make it up as he went along.

2) Split-screen camera trickery
Brown watched an episode of Friends where Lisa Kudrow plays both Phoebe and her twin sister Ursula giving him an idea for a lottery stunt which he will then have to come up with a pseudo-scientific bullshit explanation for because it is so obviously a camera trick.

3) He doesn't care
It's just a trick, it doesn't really matter how it's done and he gets paid either way. 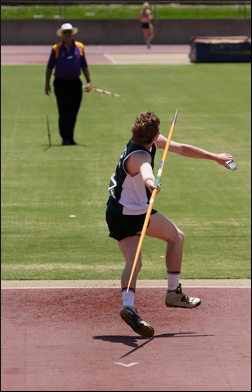 THE potentially fatal consequences of texting while competing in track and field events will be highlighted in a series of shocking adverts.

Tom Logan, deputy director of the British Athletics Association, said: "Last month a talented young triple-jumper from Peterborough was trying to send a text during his run-up.

"He sprinted straight past the pit and crashed into a greenhouse a quarter of a mile away. He was cut to ribbons."

He added: "It starts with a relay team texting each other mid-race about how soon they will be arriving with the baton and it ends up with some poor lad throwing a shot-put in his own face."

The hard-hitting adverts show a young girl texting while throwing a discus. The image freeze and the message, 'Juz thnk abt wht ur doin' flashes across the screen.

The film continues as the girl throws the discus in the wrong direction, bringing down a local crop dusting aircraft which crashes into an ice-cream van. The film ends with the sobering message, 'Now ur soz rnt u'.

Mid-event messaging has also invaded the world of Formula One where Rubens Barrichello almost lost control of his car after being forwarded nauseating images from 2girls1cup.com by Brawn teammate Jenson Button during last month's Belgian Grand Prix.

A Brawn spokesman said: "Rubens had sick all over the inside of his helmet and couldn't see where he was going."