THE growing popularity of watching other people play computer games is a step forward for zero-effort entertainment, experts believe.

Experts believe Google’s $1bn valuation of a website where users watch strangers playing video games is part of a trend towards the ultimate non-participatory leisure experience.

Software developer Nikki Hollis said: By comparison to looking at other people’s games of Pokemon, watching normal telly is a mental challenge on a par with reading War & Peace in a single sitting.

“Right now the question is how to make entertainment more suited to inert people.

In the next Grand Theft Auto, characters will simply complete missions on their own, leaving the player free to go to sleep.

LucasArts is planning a game based on Star Wars Part VII which involves players watching other players controlling Han Solo during a long bath. So youll just be watching someone occasionally hitting X to top up the hot water.

Hollis said companies were now developing completely new, effort-free entertainment technology, such as the Sony WatchBall, a small plastic ball that trundles around a room which can be watched or completely ignored.

She added: Microsoft is hoping to get a share of the market with a television that constantly explains whats going on while tucking the viewer up under a large duvet.

Our only limit is our laziness. In 2030 well probably entertain ourselves by floating semi-conscious in a vat of liquid anaesthetic while listening to Enya. 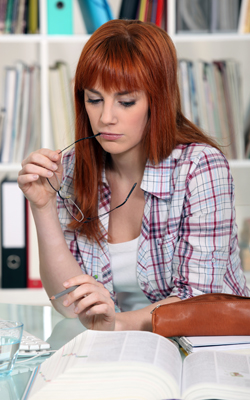 BRITISH students have asked for their exams to be moved to when it is dark and pissing down.

The proposal has been signed by more than 60,000 students revising for GCSEs, A-levels and university qualifications while gazing longingly out of windows.

Instead were stuck inside reading textbooks, communicating with our equally isolated peers via shout-outs on Radio One.

The terrible irony is we are almost completely idle for the rest of the year.

The National Union of Students has lodged an official complaint with the UKs educational institutions, along with a motion to change the word ‘revising’ to  ‘vising’ because nobody did the work first time around.

A spokesman for the Confederation of British Industry said: Do you think employers really want staff who know when the Corn Laws were abolished, or how to calculate the hypotenuse of a right-angled triangle?

The real point of education is to train workers who can ignore every natural human instinct to drop everything the minute the sun is out.

Good luck to all the kids doing exams out there. Work hard now.