Dozens of film critics and movie-goers have come forward to say they have a fuzzy recollection of meeting the director in a Parisian cafÃ© after seeing the film and agreeing with him that it was a masterpiece before the cafÃ© turned inside out and a herd of 90ft-high Morris dancers clambered out the back of their dad’s 1978 Ford Cortina which was being driven by their girlfriend from school.

Professor Henry Brubaker, of the Institute for Studies, said: “Our initial research suggests that Nolan didn’t necessarily implant the idea that it’s a good film, he implanted the idea that if you say it’s a bad film you’ll look like a fanny.

“Meanwhile only four percent of the people who are tweeting about how good Inception is have actually seen it. The rest of them have been implanted with a dream that they’ve seen it, or a dream that they haven’t seen it but they know that dream really was a dream which therefore means they must have seen it.”

“Anybody fancy watching Carry On Up the Khyber?”

Julian Cook, film taster for the Guardian, said: “I was not a fan of Mr Nolan’s previous work because I believe that Batman should be portrayed by an actor who is keenly aware that he is dressed as a sort of bat.

“But Inception is daring and ingenious. It is The Matrix for people who drink wine.”

And Wayne Hayes, from the Independent, said: “Ingenious and daring. I love the fact that most of the film takes place upside down. Or inside its own chutney funnel.”

Members of the public have also accused Nolan of trying to implant sub-conscious opinions in their heads by sneaking into their bedrooms in the middle of night and sleeping next to them like some pervert stalker.

Tom Logan, from Finsbury Park, said: “I woke up at 2am to find Mr Nolan curled up at the foot of my bed wearing a tinfoil skull cap with a six foot length of copper wire coming out of the top which, I subsequently realised, was attached to the end of my nose with a bulldog clip.

“I screamed and shouted ‘who the hell are you and why is my nose wired up to your hat?’ but he just threw some glitter in my face, ran down the stairs, jumped into his car and roared off.

“He has a batmobile.” 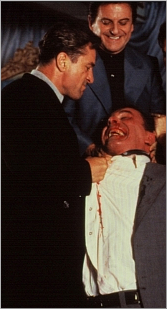 With Jimmy Conway and Tommy DeVito

A house
With a door
One, two, three, four
Ready to play
What’s the day?
It’s Tuesday you dumb fuck

Tommy D: Hello to all you little kiddy-winks from myself and Jimmy here. You know, we was kinda talkin’ the other day about how to take care a that Big Ted thing and we kinda came to an understandinâ€™. Now you may know that Jimmy here don’t like Big Ted – he’s been throwin’ his weight around lately and showin’ disrespect to Hamble and the other dolls.

Jimmy: At this point I would also like to say that Big Ted is a fuckin’ degenerate gambler who owes me seven big ones – I gotta tell you, if he don’t pay up within the next day heâ€™s going straight through the fuckin’ arched window – head first. I want my money TODAY! TODAY!

Tommy: Not all the dolls are bad though Jimmy – I like Humpty, he’s a stand-up guy.

Jimmy: And my hand is on your sister’s ass.

Jimmy: I know, it just came to me – I’m real smart that way.

Tommy: Enough of that shit, I think it’s time for today’s story. Jimmy.

Jimmy: Once upon a time, two very naughty men thought it might be a good idea to start shaking down the regulars on my rounds. Long story short, Tommy and myself went down there with a few friends of ours and made sure the bad men were never naughty again.

Tommy: Ok, we was gonna go through the round window to see one of them dumb educational films about a fuckin’ milk bottle factory or whatever the fuck it is you kids are into. But the truth be told, Jimmy got a little bit upset when they showed a factory making licence plates for cars – you see it kinda took him back to the time he went away on that special five-and-a-half-year vacation with Uncle Paulie.

Jimmy: Not good, not good.

Tommy: Anyways, that’s all we got time for today – don’t forget to tune in tomorrow when that dipshit Brian Cant will be presentin’ the show with Toni Arthur, who I’ve been trying to bang for three fuckin’ months now.