JERRY Dammers of The Special AKA is furious that nobody ever told him Nelson Mandela was also known as Madiba.

The ska legend believes he would’ve had a far easier time writing a top ten hit if he’d had a three syllable name to work with rather than a five syllable one.

He continued: “My single, Free Nelson Mandela, took me two years to compose because it’s absurdly hard to write a snappy chorus around that name.

“I tried getting away with Free Nelson but everyone thought the song was about the historical admiral. Somehow Free Nelson M wasn’t right either.

Music historian Carolyn Ryan said: “Having a name that scans well in the chorus of a pop song is very helpful if you’re a victim of government injustice.

“It explains why, despite Ukrainian protests being in the news, not one person in 100 can name wrongly imprisoned former Ukrainian Prime Minister Yulia Tymoshenko.”

Former Genesis frontman Peter Gabriel said: “When I started writing my hit song Biko, I didn’t even know who Steve Biko was.

“I just heard the name and thought it sounded kind of catchy.” 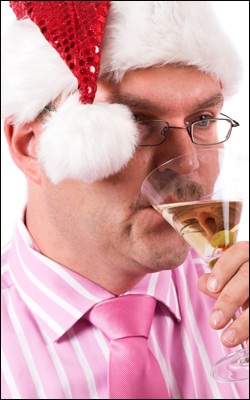 BRITAIN’S bosses have confirmed plans to let their hands ‘accidentally’ fall onto buttocks at the office Christmas party.

Middle-aged senior managers said their sweaty palms will land on a female employee’s lower back then slide down to upper buttock as if by accident.

Company director Tom Booker said: “I would never sexually harass my staff, but I will get as near as possible to doing so within legal boundaries.

“My favourite party move is a technique called the ‘hugfondle’. It’s a friendly embrace that I hold for a few seconds too long, getting a bit handsy at the end.

“Laura from marketing just feels so warm and womanly, unlike my wife who is cold to the touch like a shard of husband-resenting ice.”

56-year-old area manager Stephen Malley said: “Christmas is a time for giving and I want to give some of the sales team a bit of a feel.

“Of course I would never take advantage but when we’ve got our arms interlocked for a group photo I might have to steady myself by clutching a buttock, that sort of thing.

“The ladies never complain, after all they’ve just had a free meal plus crackers and party hats. Plus jobs are hard to come by these days.”

He added: “This is literally the only thing I look forward to all year.”