JURASSIC World’s portrayal of the Ankylosaurus, has been criticised by a dreary man.

Julian Cooke, 43, attended the film alone and snorted his derision throughout, looking frantically around the room in the hope of finding a fellow dissenting voice.

Before the final credits had finished Cooke was questioning the the blockbuster’s paleontological accuracy aloud, eagerly anticipating the Twitter storm he would unleash once he got home.

Cooke said: “Like everyone else, I was hoping to see an accurate depiction of creatures from the middle period of the Mesozoic Era, so to see the Ankylosaurus, which everyone knows is a plant eater, killing and eating prey was repellent.”

Fellow cinema-goer Nathan Muir said: “I’m pretty sure it was the same guy who mumbled about tectonic plates through Ice Age.

“If you really want to pick holes then ask why people keep believing a dinosaur-based amusement park is a viable business idea, or how they keep getting public liability insurance. Or why anyone would not want to see Chris Pratt get eaten alive.” 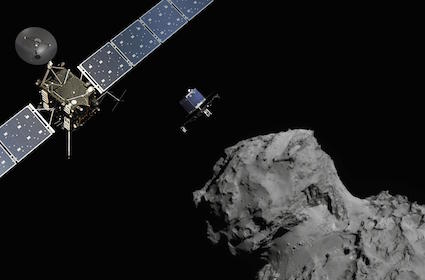 THE comet lander ‘Philae’ lost contact with Earth because it was too busy looking at lady comet landers.

The spacecraft initially blamed its seven-month silence on battery failure, but has since admitted that the presence of female vessels in its orbit made it impossible to concentrate on the mission at hand.

Philae said: “When I landed on my comet back in November, I was all ready to knuckle down, work hard spend the next few months doggedly mapping previously unchartered cosmic terrain.

“But then I noticed there were loads of properly fit female comet landers working within just few hundred million miles of me.

“It doesn’t take a genius to guess what happened: I fell in love with them, they fell in love me, and boom: suddenly, there’s sod all work being done because everyone’s banging each other senseless.”

“They should really leave comet landing to us blokes, and stick to landing on stuff like the ironing or the washing up instead.”