POP music has finished and will now be run backwards, with acid house due to return in 2042 and the Beatles reforming in 2060.

After reaching its natural end on Wednesday, the charts will go in reverse with the current number one by Jason Derulo remaining at the top until replaced by its predecessor, OMI’s Cheerleader.

Music blogger Tom Booker said: “It’s not likely anyone will notice at first, because it’s all the same Autotuned R&B shit, but the nightmarish hellscape of the landfill indie years now lies ahead of us, and few iPods will survive.

“We’ve got B*Witched and the nuclear winter of Bryan Adams’s Everything I Do to get through before the 1980s, when there were at least a few decent records, and if anyone doesn’t like rap expect to see it disappear forever around then.

“It will be weird seeing the Beatles come along as this incredible act of three accomplished songwriters and Ringo before diminishing down to a boyband of four Ringos, but most of us will be senile at that point.

“The pre-60s, full of skiffle bands and Max Bygraves singing I’m A Pink Toothbrush are a toxic legacy we can leave for our children to worry about, like global warming.”

Queen's new car has gun mounted on it 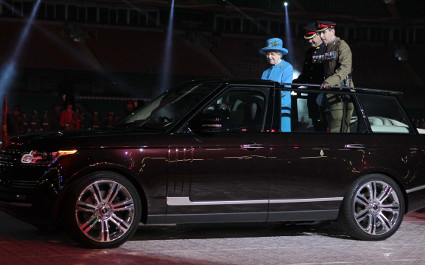 THE Queen’s new open-topped Range Rover has a machine gun on the rear at her personal request.

The State Review Vehicle, used for the first time in Cardiff yesterday, was designed so the monarch can wave at crowds or mow them down according to her Royal whim.

A Royal spokesman said: “The Queen is also Commander-in-Chief of the Armed Forces and has decided that, at the age of 89, it is time to take a hands-on approach.

“In future she has asked to be seated at the weapon, wearing full military fatigues, and she will train it on visiting dignitaries or members of the crowd.

“It is, of course, kept fully loaded with red, white and blue tracer bullets. What a marvellously patriotic sight it will be when she finally opens fire.”