BRITISH children have stepped up their demands for television programmes they will be able to bore each other with at dinner parties.

As a debate begins on the future of children's television, the nation's youngsters say they are worried they will not be able to have hilarious conversations about the sexual inclinations of a wide range of animated characters.

Eight year-old Wayne Hayes from Stevenage said: "Teletubbies has some mileage because of all the freaky gay stuff and the insidious catchphrases, but it does not have the same sense of wonder you get with a Mr Ben or an Ivor the Engine."

He added: "I want to be able to chat-up vacant birds using my hilarious observations about the TV shows I'm watching now. I want my Captain Pugwash. I want my Mary, Mungo and Midge."

Media analyst Bill McKay said: "Our generation can have a genuinely interesting debate about the attractiveness of Valerie Singleton or Lesley Judd, whereas I think there is now universal agreement that Konnie Huq is a total pump."

He added: "Just last week I was at a dinner party where I was playfully reminiscing about The Clangers. I even did my famous impersonation of the Soup Dragon.

Roy Hobbs, a media analyst, said: "I was at the same dinner party and I did a fantastic impersonation of Idris the Dragon, but everyone seemed to be in a Clangers mood. Fuck Bill McKay."

Britain To Become Perv Nation By 2012 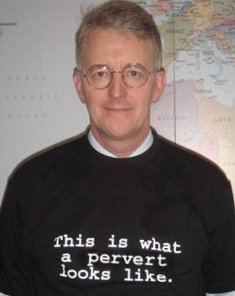 BRITAIN will become a nation of pervs within five years, making it the second kinkiest country in Europe after France, according to new research by the Joseph Rowntree Foundation.

Perviness, once restricted to the higher echelons of society such as the royal family, the upper class and Richard and Judy, is now common within the middle classes and increasingly prevalent even among the previously prudish working class.

However, a small but significant number of people are still not pervy at all creating a worrying and ever-widening gap between the pervs and perv-nots, the Foundation said.

Dr Roy Hobbs, chief researcher at the Foundation, said: “We are not communists. We recognise that some people are always going to be more pervy than others. But it can't be right that while most people will find this paragraph devoid of any titillating material at all a significant number will have fainted just because it contained the word 'perv'."

According to the Foundation the top ten per cent of pervs account for nearly 60 per cent of perversions performed in Britain today. Meanwhile a stubborn rump of 10 per cent of the population refuses to countenance anything kinky at all.

Dr Hobbs called for greater leadership by the Government to encourage broader perviness claiming that Gordon Brown’s administration was one of the least kinky in modern times, with only Jack Straw, Des Browne and Hilary Benn openly pervy.

However, Hazel Blears, secretary of state for communities and the owner of a leather catsuit, hit back saying tax and benefit changes since 1997 had greatly increased perversity, although she admitted Britons would never become as pervy as the French, who were not only extremely kinky but also did not wash.

“Since 1997 more than one million pensioners and 600,000 single mums have been transformed into pervs thanks to our reforms and the average household is now 1,000 times more pervy than 10 years ago,” she said.

According to the JRF the top ten most pervy things in Britain at the moment are: