A MAN is worried that he cannot differentiate between incredible acting performances and ones that are quite poor.

27-year-old Tom Logan frequently feels intimidated when his friends confidently praise an actor’s performance because he is not sure which specific things about it were good.

Logan said: “I get that some actors are better than others, because people like Meryl Streep look really into it, whereas on EastEnders they just say the words while they’re pointing in the right direction.

“But I don’t understand why some actors’ performances are amazing and some are apparently average, when most of them are okay at pretending to cry or be angry. Some of them twitch their eye when their character is being devious, that’s a good trick.

“The most confusing one is Sylvester Stallone, because everyone used to take the piss out of him for being awful but now he’s getting loads of awards. It’s almost as if there’s a certain amount of bullshit in the entertainment industry.”

He said: “I think the problem is that all my friends have a deep understanding of acting. There’s no way they’d just repeat things they’ve read in The Guardian to sound knowledgeable about films.”

Everything in Europe was great before you arrived, migrants told 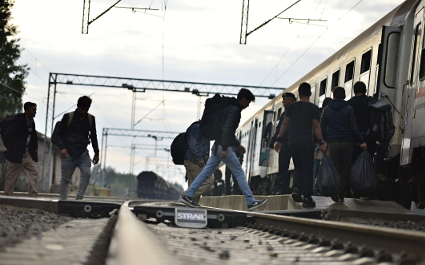 MIGRANTS to Europe have ruined what was a perfectly-functioning near paradise, they have been told.

According to ECB president Mario Draghi, Europe had achieved full employment, eliminated poverty and was just about to move to a three-day week before the migrants arrived and ruined it all.

He said: “The moment the first migrants arrived in Greece, they caused a previously perfectly stable financial system to retroactively collapse eight years ago, reducing it to the beggar of Europe.

“As they moved through the Balkans they caused nationalistic hatreds to arise among ethnic groups which had previously had nothing but love for one another, and in Austria they similarly aroused hitherto unthinkable racism among its 97 per cent white population.

“Finally they arrived in Germany and somehow turned the happy-go-lucky nation into stern penny-pinchers who would stop at nothing to protect BMW prices.

“It is no wonder Britain is considering leaving the EU, which it never did before because of its tolerant, sophisticated and chiefly bilingual people.”