Man kills himself for enjoying 'Jamie's Summer Food Rave Up'

31-YEAR-OLD Tom Logan took his own life after failing to hate TV chef Jamie Oliver’s festival-themed show, it has emerged.

Oliver’s latest Channel 4 series features the chef at a food and music ‘Feastival’, interspersing cookery with snippets of anodyne 90s indie and demographically-diverse revellers pointing at the air.

Logan’s girlfriend Emma Bradford said: “Tom loathed Jamie Oliver with a passion, referring to him as ‘Sainbury’s grinning fuck pet’ which I thought was a bit extreme. I mean, he’s just a cook, right?

“Anyway, I made him watch Jamie’s Summer Food Rave Up because I like that sort of thing. At first Tom was practically foaming at the mouth, saying things like, ‘I wish I could get in the telly, like the witch from Ring in reverse, and take the handbrake off that camper van so it rolls over his big head and squashes it like an overripe pumpkin’.

“As it turned out, I didn’t particularly like the show and eventually suggested we watch something else. But, oddly, Tom refused, saying he just wanted to see how Jamie cooked his jambalaya for Dalston knitting club.

“Then he got this weird look in his eye.

“After the programme he went upstairs while I watched CSI. I never saw him alive again.

“He left a note saying, ‘I have become the thing I hate’.”

Balls is a vampire, says Osborne 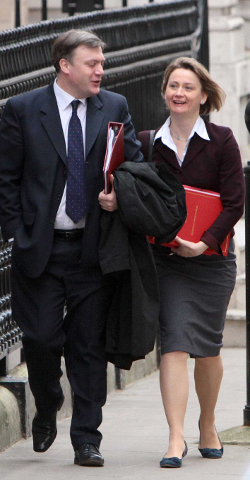 GEORGE Osborne has launched a fresh attack on Ed Balls, saying he is ‘pretty sure’ the shadow chancellor is a vampire.

After attempts to link Balls to the Libor scandal failed, Osborne is now claiming that Balls is an undead parasite who lures lost travellers to his castle with the promise of fine wines and a chance to meet his beautiful sister.

Osborne told the Commons: I’ve spoken to numerous West Yorkshire virgins who have woken to find Balls scratching at their windows with his needle-like talons.

Also, just look at him.

I would urge all members of the House to drive wooden stakes through Balls black heart, then stuff his mouth with garlic and chop off his bollocks.

If hes not a vampire it wont hurt him. I looked it up.

The chancellor then produced a picture of Balls sneaking up on children in a playground, explaining that the shadow chancellor could not actually be seen due to having turned invisible.

Labour leader Ed Miliband said: Ive known Ed for many years and I have never seen him behave inappropriately towards a sleeping girl.

Also, vampires are thin, charismatic and highly intelligent, whereas Ed is a big sweaty thing who only manages to score points in debates because the government is so incompetent.

However I did once see him become a wolf to evade journalists. But that’s just being a gifted politician.”

Political commentator Stephen Malley said: Having a vampire as shadow chancellor would be highly damaging for the Labour party, but whats the alternative? Harriet Harman?

Miliband will come to some arrangement, like when Dennis Skinner turned out to be a werewolf and John Smith gave him a sheep allowance.