A 28-YEAR-OLD man simply cannot get his head around the rules of TV game show Pointless.

The show, where the least popular answer wins, still confuses Martin Bishop despite him having watched it on a number of occasions.

He said: “I was watching it with my girlfriend the other day and one of the answers was clearly To Kill a Mockingbird but she said that would be too obvious so I wouldn’t win.

“What kind of bullshit is that? It’s the right answer.

“That wasn’t the first time we’ve had that conversation either so I’m just going to stop watching it I think.”

Bishop added: “How the fuck could he be a ghost? He was going round doing stuff.” 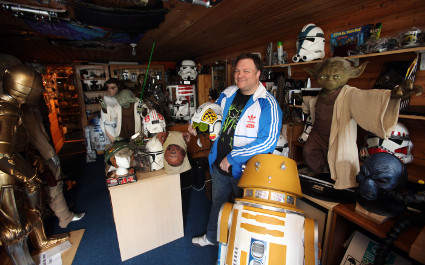 The fans, many of whom date back to the first movie in 1977, have never been opened to non sci-fi experiences and command a high price from collectors.

Auctioneer Emma Bradford said: “Back in the 70s and 80s people thought Star Wars fans were there to be played with, which most picked up signs of wear and lost little things like their charming innocence.

“However, a few fans have survived without any damage at all mainly by shutting themselves away in windowless attics.

“Most collectors are tech billionaires who put the fans in glass display cases as a memento of their own lost exuberance.”

The fans on offer include a rare British fan who was never put into full production because of his asthma, US fan Wayne Hayes who due to an error in manufacturing has black hair and a ginger beard, and ultra-rare female fan Susan Traherne.

Bradford added: “And there are some newer ones, including a fan who defends The Phantom Menace as a genuinely great film and finds Jar-Jar Binks hilarious.

“We believe he’s the only one of his kind in the world.”