43-YEAR-OLD man Tom Logan chose to go and see the musical version of The Bodyguard, it has emerged.

Logan was seen emerging alone from a performance of the long-running stage show amid large groups of middle-aged women getting back onto coaches.

He said: “It’s just a great story, I don’t see what the problem is.

“There is nothing inherently unmanly about going to see a show where the main character is an idealised version of a strong, paternal-but-sexy protector.

“Essentially it is a thriller, just like The Bourne Identity but with more Whitney Houston songs.

“Tristan Gemmill, who plays security expert Frank Farmer, does a great job of filling Kevin Costner’s shoes. And Alexandra Burke is a perfect diva, what’s not to like?

“Men who think they wouldn’t like The Bodyguard musical are just insecure.”

Fellow audience member Emma Bradford said: “Looking out across the auditorium full of excited ladies, I noticed that one of them had male pattern baldness.

“It slowly dawned on me that it was, in fact, a man.

“I was going to tell security, but I get a bit shy around strong men with earpieces.”

Plain cigarette packaging to be designed by Apple’s Jony Ive 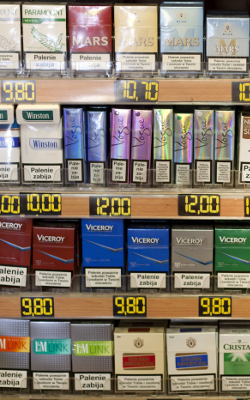 DESIGN guru Jony Ive, the man behind the iPod and iPhone, has signed up to design the new featureless cigarette packaging.

Legislation outlawing decoration on cigarette packets is expected to eliminate smoking because nicotine addicts are just magpies who like shiny things.

But the tobacco industry is fighting back by employing minimalist Ive to make fags a must-have among urban trendsetters.

Ive said: Im very much against smoking but when I heard about the opportunities this project offered  a completely blank box  I knew I had to be involved.

Ive sourced the finest paper bleachers to make sure its stark polar white, rounded the corners to take away the oppressiveness of the right-angle, and stopped the packet opening because it ruined the smooth line.

On the actual cigarettes Ive taken away the brown filter so you dont know which end of it to light.

Initially theyll be available just in white, but after a year well launch them in a range of eye-popping translucent colours that are addictive both chemically and aesthetically.

19-year-old Emma Bradford said: Ive got to get on this. I am going to smoke so much now.