New Game of Thrones is just everyone introducing themselves

FANTASY series Game of Thrones is to return with an hour-long episode in which all the characters introduce themselves to camera.

The season opener, which contains no action at all, shows each of the 214 main characters giving their name, family connections, and recent history and motivations at length.

Producer Julian Cook said: “It was going to be one of those two-minute ‘previously on Game of Thrones‘ things, but then it stretched to 30 minutes, then a full hour.

“And it proved so useful for the actors, who haven’t got a clue what’s happening half the time.

We’re sure everyone will particularly enjoy their five minutes with Hodor.

Viewers are encouraged to take notes and to put a map on their wall with pins showing where everyone is and threads showing where theyre going, like theyre homicide cops.

Stephen Malley of Luton said: Im a busy man who watches loads of telly, and frankly all I can remember from the last series is someone’s pecker getting cut off.

This will be invaluable, and if the characters could start wearing coloured hats to indicate whos a goodie or baddie that would be even better.

However, preview audience member Wayne Hayes disagreed: I didnt see one pair of exposed breasts the entire episode. What do they think I put up with all that Vale of Arryn bullshit for?

Farage thinks about Putin while showering 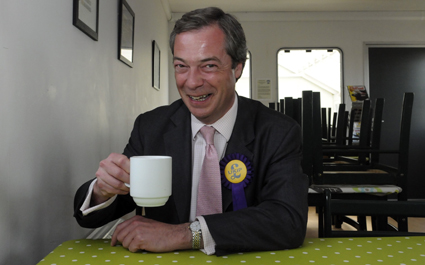 NIGEL Farage has named Vladimir Putin as his favourite politician and revealed that he often thinks of him while showering.

But Farage insisted there was nothing homo-erotic about his feelings for the Russian president and that they could easily share a hotel bed if there was some kind of booking error.

He added: “Like Russia, UKIP is a place for strongly heterosexual men who admire each other’s virility.

“I often think about President Putin while I’m showering because that’s where I do most of my thinking. I decided to oppose gay marriage just as I was coming to the end of a particularly interesting shower.”

A Kremlin spokesman said: “Mr Farage is virile and manly. We have sent him a signed photo of President Putin on a horse.”