FORMER clubbers are choosing to stay in and recreate the deeply unpleasant nightclub experience in their homes.

As it emerged that almost half of UK nightclubs have closed, Britons confirmed that it that was less hassle to invite loads of sleazy men and idiot cokehead girls round and charge everyone two quid to hang up a coat.

23-year-old Nikki Hollis said: “Going to clubs is absolutely horrible but also expensive, whereas turning your house into a nightclub is horrible but immensely lucrative.

“I’m charging a fiver for warm cans of Heineken, and my housemate’s in the bathroom spraying Joop! aftershave onto people then hassling them for a pound coin.

“To complete the dehumanising, authentic club vibe we’ve got two burly gym freaks intimately searching everyone on the door and a middle-aged man in a vest DJing decades-old house music.

“I’ve turned the taps off so people have to buy ‘mineral water’, it’s illegal but hey this is a business now.”

Hollis said that she planned to turn her house, 53 Middle Street, into an international clubbing brand by loaning other party hosts a banner with ’53 Middle Street’ written on it in a cool font.

However nightclub owner Tom Booker said: “We are being crushed by the rise of living room superclubs.

“Not sure where we went wrong. Yes we’ve treated our customers with utter contempt but they always seemed to like it.”

Boss worried compliment might be incitement to ask for pay rise 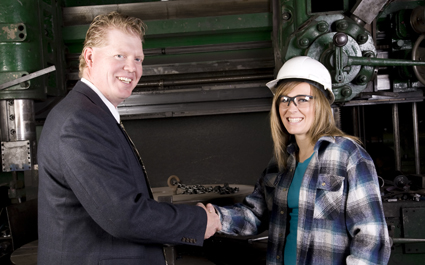 A BUSINESS owner is concerned that a compliment paid to workers will make them demand more cash.

Tom Logan, who runs an engineering firm, made an appreciative comment to a group of staff after a week of record-breaking sales.

While making his rounds of the shop floor, the usually terse Logan said: “Nice one guys. Good work.”

However he now fears that his emotional generosity may backfire: “Normally I’m just moody and don’t say anything to staff that isn’t a command or a perfunctory query about how their weekend was, pitched just right so that they know I don’t really care.

“After my reckless compliment they’re all going to be banging on my door demanding above-inflation pay rises, sabbaticals, time off to do massage courses, that sort of thing.

“Saying ‘nice one’ was a mistake but using the phrase ‘good work’ was just pouring petrol on the flames. This is a monster balls up.

“They’ll think I reckon their work is good, which I generally don’t. The main thing however is that they can’t have more money, because then it’s less money for me.

“Now I have to prepare my spiel about how tough things are, because of the banks and so forth.”

Employee Mary Fisher said: “I was quite shocked when Mr Logan made his nice remark. I think it’s the first time he’s ever noticed me apart from pulling me aside for a warning about wearing too much makeup.

“I never knew he was actually such a good person.”