OFCOM, the broadcasting watchdog, is to launch a full-scale inquiry into televised nipples, it emerged last night.

The regulator said it was deeply concerned after more than 38 people complained about almost seeing some nipples on the ITV talent show Britain's Just Awful.

Angry viewers contacted the channel after 35 year-old contestant Fabia Carrera removed her clothes to reveal a pair of tassels covering what experts said were almost certainly nipples of the female persuasion.

A spokesman said: "Of the 39 complaints, 34 were from people who feel that nipples are inappropriate, especially when perched precariously at the out-most extremities of a female bosom.

"The remaining five were from men who have recently lost their jobs and have been forced to cancel their subscription to Red Hot Dutch and now require access to as many free nipples as is humanly possible."

Mrs Margaret Gerving, director of the Anti-Nipple League, said: "Am I French? Is this France? At the very least they could ensure the nipple-coverings are in the shape of Sir Winston Churchill or Jesus."

The Ofcom inquiry is expected to be wide-ranging and will consider proposals for a 60% increase in the statutory Prime-Time Nipple Exclusion Zone.

A spokesman added: "We really must think about raising our complaint investigation threshold to more than 0.004% of the viewing audience."

Official: Your Life Is Worthless 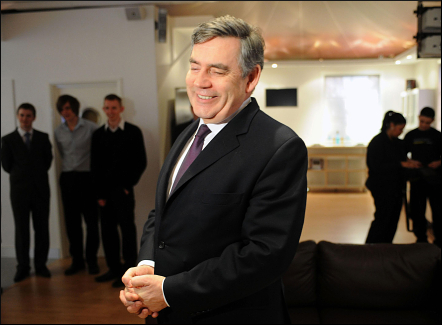 YOUR identity, your achievements and everything that is you is now worth less than a bag of funsize Mars Bars, according to a new report.

Internet security firm Symantec said the recession had driven down the value of stolen identities to the point where East European gangsters are giving away six of you for a fiver.

According to the report an entire Knutsford housing estate was sold for £20 while professional identities such as doctors and lawyers are being offered in conjunction with a free gift such as a DVD player or a pen.

Identity expert Henry Brubaker said: "You may think you're hot shit amongst your friends, but to a Bulgarian fraudster you're little more than loose change down the back of the couch.

"A stock market trader used to fetch £100, but nowadays, by the time fraudsters have set up the bogus direct debit, their target is living in a skip and manipulating genitals for meths money."

Another cause of falling identity values is the sophisticated methods used by scammers who often send emails that start off by saying they are not asking for your account number before it turns out that they are.

Symantec stressed the report should not stop consumers buying their premium anti-virus software package, even if it is obsolete by the time you get it home.

A spokesman said: "The latest version includes some really exciting new phrases such as 'shop with confidence' and 'botnet phish detector'. Even better, it will install 5GB of incredibly vital stuff you don't need every 30 seconds, slowing down your computer to the point where you will gladly pay us £1000 to assassinate you."