Only Connect, QI and four other TV shows for people who think they're better than you

JUST settling down for Celebrity Ex on the Beach when the smart-arse smuggo you live with flicks one of these wanky shows on?

Victoria Coren-Mitchell’s simpering geek-fest was born when one TV exec said to another, ‘People love getting questions right when watching quiz shows, so what if we made that f**king impossible?’ Anyone who claims to ‘enjoy the challenge’ can shove some Twisted Flax up their Eye of Horus.

For almost twenty years, QI has been the steadfast companion of pub factoid lovers, correcters of technicalities and nerdy boyfriends who laugh superciliously at their partner’s ignorance. Oh, so ostriches don’t actually stick their heads in sand? Well first that’s made the world less fun, and second who gives a shit?

It’s a f**king stitch-up that gives Oxbridge colleges a clear advantage, cementing the class disparity and condemning the poor to stunted half-lives, and that’s not the worst thing about it. It’s the questions about ridiculous bollocks nobody’s life is enriched for knowing. That’s what’s worst.

Imagine the Gestapo but if they asked you about the life and music of Britney Spears. Superior twats love to imagine themselves storming their specialist subject round, which would be along the lines of ‘Pokemon cards I owned when I was 14’.

Half the jokes in Frasier are references to shit that only the intelligentsia of the 90s – those who preferred Pulp to Oasis – and anyone with a working internet connection would know about today. Watch them chuckle extra-knowlingly at gags involving opera, Jungian therapy, or sports-loving morons.

The towering, bespectacled hero of the self-satisfied middle-classes who believe they too could write a top crime thriller if they only tried helms a new show that cuts out those of us who only managed Pointless because of a knowledge of 80s snooker players. He can f**k off with his brainteasers. 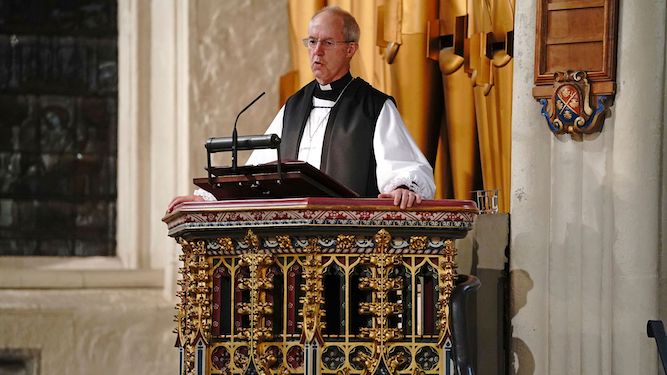 SHIPPING asylum seekers to Rwanda sounds just like God’s antics in the first half of the Bible, believers have told the Archbishop of Canterbury.

The Most Reverend Justin Welby pronounced the government’s plan to deport all asylum seekers to Rwanda against the judgement of God before being reminded that before He had a son God was involved in some pretty messed-up stuff.

Martin Bishop, a practicing Christian, said: “I agree, the Rwanda plan is f**ked up and inhuman. But ungodly? The big man upstairs once turned a woman into a pillar of salt because she looked back at a city he was destroying.

“Then there was the time He flooded the entire planet instead of fixing its corruption. I could see the government signing off on that policy.

“He unleashed ten plagues on Egypt because the Pharaoh refused to set the Israelites free. Half a dozen plagues would be overkill. Ten? That’s taking the piss.

“Following which the Israelites, who are supposedly God’s favourites, wandered the desert for 40 years. Which is the Tory asylum-seeker plan in a nutshell.”

Home secretary Priti Patel said: “Sounds great, I’d love to read it. But whenever I touch a Bible my hand bursts into flames and I howl to my dark Master. It’s weird.”