Oscars highlights 2013: Day-Lewis to run for presidency as Lincoln

OSCAR winner Daniel Day-Lewis has launched a bid for the US presidency in the character of Abraham Lincoln.

The three-times best actor winner announced his political ambitions during an acceptance speech delivered in the character of the former president.

He began: “That bullet wound was actually just a graze, then they froze me for a number of years. How’s it going with the slavery thing?”

The actor’s spokesman said: “Daniel’s bored of collecting Oscars, to him it’s as routine as going to buy milk from the shop. So he’s staying in character until he gets elected to run the world.

“Everything Daniel/Abraham does is unbelievably intense and immersive. Even when he’s just eating some crisps, every crunch is pregnant with anticipation.

Silver Linings Playbook actress Jennifer Lawrence did a bit of sick in her hand while walking up to collect the best actress trophy. She said: “I thought it was going to be a burp. I can’t believe sick came out, total nightmare.”

The office after-party was trashed by Gremlins from the film Gremlins, who had just lost out to Critters for the best 90s small monster franchise prize.

Live singing by the cast of Les Miserables delighted people who like that sort of thing.

Tommy Lee Jones took the best supporting actor award after dragging Christopher Waltz into the disabled toilets and kicking shit out of him.

At the prestigious Governers Ball after-show dinner, delicacies such as slow-braised lamb shank were served to people who do not actually consume calories, who then hand-fed their meals to personal eaters crouched at their feet. 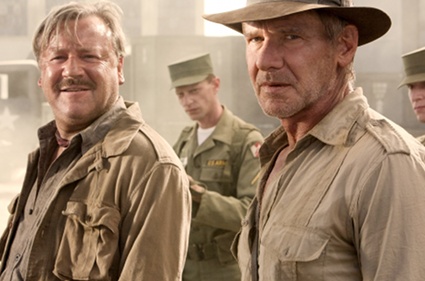 INDIANA Jones and the Last Crusade was an apology for the second Indiana Jones and the fourth film was the withdrawal of that apology, Steven Spielberg has revealed.

The director felt it was necessary to say sorry to fans for Indiana Jones and the Temple of Doom, but then 20 years later thought, ‘fuck that, I’m Steven Spielberg’.

He added: “By then I’d made Schindler’s List and realised that I could never have been wrong about anything, but I had to find a way of making sure everyone knew just how much I regretted my first apology.

“At the premiere of Crystal Skull I just kept saying to myself, ‘who’s sorry now, you fuckers’.”