THE latest Pirates of the Caribbean film has been praised for recreating the boredom and restlessness of 18th Century sea voyages.

Historians confirmed that Dead Men Tell No Tales gives a genuine sense of what it was like to spend months at sea with nothing of interest happening.

Naval historian Roy Hobbs said: “With nothing to do except check rigging or play cards, sailors would often go to sleep just to kill time, which is exactly what I did halfway through. It’s less of a film than an interactive history experience.

“On deck they would have constantly talked shit to stop themselves going mad from staring at miles of featureless ocean.

“It’s incredibly brave of Disney to opt for a realistic approach when they could have made a highly lucrative film that people really enjoyed, like the first one.”

Cinemagoer Nikki Hollis said: “It’s all superhero films at the moment so it’s great to see some gritty realism. I expect in the next one Captain Jack will do an inventory of the biscuit rations and dried meat.”

Cuts mean army can do lots of other 'police stuff', says May 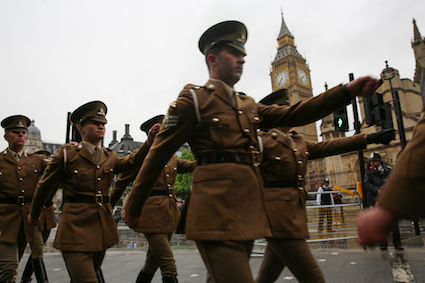 THERESA May has confirmed the army will increasingly ‘stand in’ for the police while reassuring Britain that it is ‘totally fine’.

The prime minster said that cutting police numbers by 20,000 meant the army could ‘have a go’ at investigating petty crime, providing everyday assistance and ‘maintaining order’.

She said: “It’s all just people in uniforms. Throughout history lots of other countries have used soldiers instead of police. Stop making a fuss.”

Soldier Tom Logan said: “I have no experience of investigating break-ins, so what I’ll probably do is point my gun at people and ask them if they did it.”