Remastered albums can send listeners back in time

The discovery was made when a scientist fell into his 25th anniversary copy of REMs Green and spent a quarter-century trapped in the eclectic Athens indie scene.

Musicologist Roy Hobbs said: During playback the album becomes a window to the past that the listener can physically squeeze through, assuming they’ve not put on too much weight.

Though obviously it has to be the collectors edition gatefold vinyl.

“With the glossy booklet, and a download code for unreleased tracks that presumably never came out because the band deemed them ‘excessively good’.”

Liam Gallagher plans to leap into the reissued Definitely Maybe and go back to 1994, despite warning this could trap him in a loop of his own creative decline.

Eleanor Shaw of Exeter said: My Deluxe Anniversary copy of The Cures Disintegration became a portal to 1989, when I was a slim teenager with so much going for me.

Actually, I was a sulky goth bitch who screamed at my mum when my clothes werent black enough, so I decided give my sleeping younger self backhanders across the face.

56-year-old music fan Nathan Muir said: “It’s crazy that somehow all these classic albums weren’t properly mastered the first time around, necessitating a new product. I bet the record labels are really angry about that.”

Entire Chelsea team not sent off by mistake 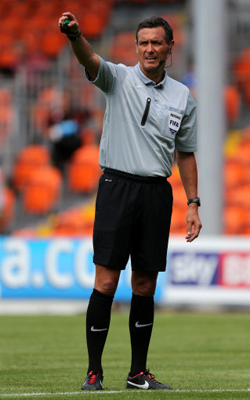 REFEREE Andre Marriner has been criticised for failing to dismiss players despite TV replays showing them wearing Chelsea shirts.

The referee of Saturday’s match against Chelsea allowed John Terry to remain on the pitch in the face of overwhelming evidence that he was, and  continues to be, John Terry.

Midfielder Eden Hazard could even be heard remonstrating with the referee, saying Look at what Im wearing, I know what I am.

Onlooker Joanna Kramer said: The crowd was dumbfounded at the sheer idiotic risk of allowing players wearing Chelsea shirts to play a full 90 minutes of football.

At the very least Samuel Etoo should have been given a red card, because it was obvious to everyone he needed a good sit-down to catch his breath. And maybe a cup of tea and a Bourbon.

Andre Marriner said: Improbable as it seems, theres actually nothing in the FAs rules prohibiting a club from being Chelsea.

Obviously high-level discussions are in progress to rectify that, and by next season we hope to have technology in place that will detect and nullify Chelsea players before they even reach the pitch.

Arsene Wenger said: If only league titles were awarded on the basis of moral superiority.

Still, at least they didnt shame the whole of English football by playing Ashley Cole.