Robert Webb: 'I simply could not cope with the shagging'

ROBERT Webb has admitted he quit Strictly because his heart could not handle the non-stop 24-7 athletic extra-marital sex.

The comedy actor confessed that while the dancing was strenuous, the pressure of finishing rehearsals and immediately beginning a 10-hour f**kathon was too much for him.

“I’m sorry to let down my partner Dianne and couldn’t be prouder of the energetic, acrobatic, movie-themed shagging we enjoyed. I wouldn’t have got this far without such a flexible and depraved partner.

“I’ve more respect than ever for the celebrities who take part. Abbey Clancy, Rachel Riley, John Sergeant, I don’t know how you did it. This show takes you to the very limit of even the most adventurous sexuality and beyond.

“I can’t tell you how many times I’ve been told how Bill Bailey satisfied every dancer on the show – male and female, two at a time – in a single session, then revealed with a cheeky wink he’d not even taken his Viagra.

“Legend. The night before the live final.”

Just say 'woke' once a paragraph: A guide to being a Telegraph columnist 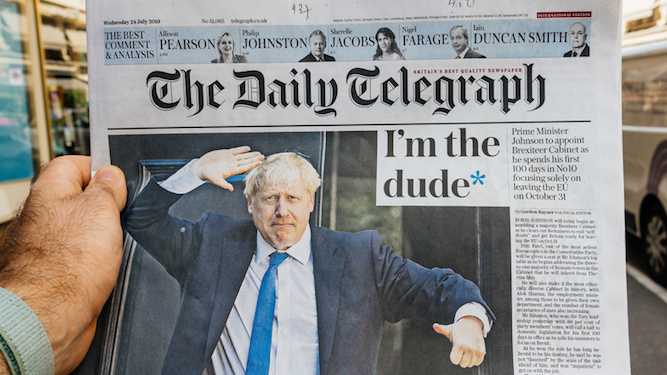 WANT a lucrative job churning out opinions for the Daily Telegraph? Follow this tried-and-tested advice for writing pandering, reactionary drivel.

Pull a ‘culture war’ out of your arse

Reach right up your rectum and pull out some niche controversies that (A) only a handful of people give a toss about, and (B) will have no effect on the real world. Make things up to ‘prove’ your point: ‘What next? A Dad’s Army remake with Pike coming out as transgender and Captain Womanwaring?’

Harp on about Britain’s youth lacking the fortitude to make it through a crisis (roll out some cliches about obesity, computer games and overprotective parents) while moaning about having to wear a mask in Waitrose for 15 minutes. Imply you bravely defied Nazi Germany aged -50.

Five years ago you were crowing about the fountain of money that would be showered on the NHS. Now that everything’s turned out like you secretly knew it would, claim that’s great too. Food, fuel and lorry shortages will make men out of us Brits, including the women, but thankfully not in the transgender sense.

Complain of being cancelled because no one reviewed your shitty novel

Pose for a photo across a two-page spread with a plaster over your mouth. Don’t mention that reviewers had better books to review than your leaden comic satire on modern Britain. Also omit the fact that your ‘cancellation’ includes a serialisation in the Telegraph.

Just keep saying it. Woke. Woke. Wokety woke. Use it until it loses all meaning. Should I no longer use obviously offensive terms like ‘poof’? It’s woke. This weather won’t make its mind up, will it? Bloody woke.