SCIENTISTS have been banned from watching the film Gravity because they kept ruining it for normal people.

Screenings of the thrilling space adventure had been marred by socially-inept scientists exclaiming loudly about minor inaccuracies of no interest to sane humans.

All UK cinemas have now forbidden anyone with grade B or above for GCSE Science from watching the film.

“Every time there was some obscure physics-related quibble they’d put their hands over their eyes and say things like ‘the Philistines have won’ or ‘in the name of Einstein!’ in exaggerated Tom Baker-esque voices.”

24-year-old Emma Bradford took a scientist on a date to see Gravity: “Instead of putting his hand up my jumper he said things like ‘I’d like to know how Sandra’s decidedly terrestrial underwear is going to process her bodily waste’.

“We went to Pizza Express after and he made explanatory diagrams with olives for satellites and strips of pepper indicating gravitational forces.”

Bradford’s scientist date Julian Cook said: “Hollywood is making a mockery of the fundamental laws of the universe.

“I must highlight that even if it means going home alone, to a milky drink and ten minutes of Babestation, every night until I die.” 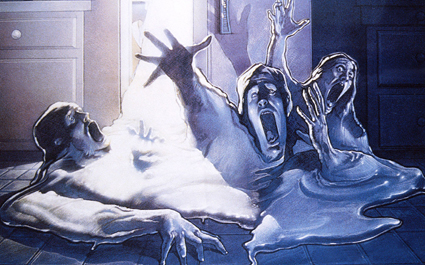 EVERY boy band of the 80s, 90s and 00s has merged into a hideous oozing blob.


Acts including McFly, Busted and Bros have had their genetic material altered to become a nightmarish seething mulch, with limbs and handsome faces protruding from it at strange angles.

Ronan Keating said: We will feed on fans by absorbing them into our vast shapeless body.”

If the army tries to intervene, our many mouths will launch into an inspiring key change and they’ll be too overwhelmed by emotion to open fire.