A PETTY thug from Gotham with unreasonably high self-esteem is confident he can take Batman in a scrap.

Tom Logan, who makes his living as a burglar, mugger, and doing occasional goon shifts for Gotham’s various villains,  believes he has what it takes to handle the crime-fighting vigilante and could easily deck the Dark Knight if he was on good form.

Logan said: “Batman isn’t all that tough. Yes, I’ve witnessed him beat the hell out of a dozen armed henchmen without breaking a sweat, but everyone gets lucky.

“And yes, he’s a six-foot-two brute with a selection of deadly weapons and a fancy car with guns on it, but I recently took up kickboxing lessons at my local gym, so I’d say we’re pretty evenly matched, actually.

“People say to me, ‘Tom, you’re being ridiculous. The Batman wears a billion-dollar suit of Kevlar body armour capable of withstanding bullets.’ But they forget my secret weapons: an aluminium baseball bat and a gang of fellow criminals as pathetic as I am.”

Mr Logan was speaking while recovering in a prison hospital after Batman caught him stealing a purse and broke 80 per cent of the bones in his body during a three-second altercation.

An £80,000 car and Ray-Bans: a man explains what women look for in a dating photo 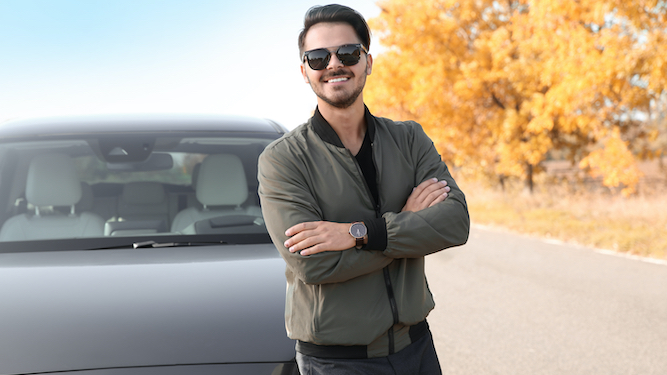 HEY ladies. It’s me, the guy on every dating app with the bio ‘just want someone who doesn’t take life too seriously’. I’ve put these things in my pictures to drive you wild:

It’s a well known fact that no woman has ever wanted to see a man’s eyes. Which is why the shades stay on. At the beach? Beer garden? Dark cave? All you want to see are the Bans. I look like Maverick from Top Gun, right? Right?

Lamborghinis are all about status. Which is why I want to show you that I have the status of a man who earns enough money to stand next to someone else’s expensive car.

Women want a classy guy, one suave enough to have a man playing polo on the front of their t-shirt. As well as being sophisticated, having little people embroidered on your clothes is a definite sign of red-blooded masculinity, and not something more usually associated with small girls’ dresses.

So many other men

You want a guy that stands out from the crowd, that’s why I’ve included me and the boys. We’ve got the same hairstyle, the same tight trousers, and you could not pick me out in the photo if you had a gun to your head. But in a unique sort of way.

I know you’re joking when you say that Snapchat died over half a decade ago and anyone who still uses it is a creep, because this filter that gives me an incredible jawline and angel wings is undeniably appealing.

Okay, I did google ‘what do women like on dating apps’, so here you go. Indulge yourselves with this no-context picture of a sleeping dog. I’m not in it, and I couldn’t be arsed to properly crop out the search bar, but hopefully it will make you think I’ve got a kind heart or some bollocks.