THE 1970s were a great decade for cinema, and also a decade where cinemagoers clamoured for total shit. These double-bills truly reflect the period:

In Serpico, undercover cop Al Pacino is shot in the face while struggling to expose corruption in the NYPD. In Mutiny, Blakey is struggling to expose incompetence at the Luxton & District Motor Company when his van is crushed and the depot catches fire. Two stories so alike, with the whistleblower a hero in one and a villain in the other.

Sex and desire: the mysterious heart of the human experience. Are we reduced to animals by our lusts or elevated above them by eroticism? Is Marlon Brando engaging in anonymous sexual congress in a Parisian apartment really so different to Robin Askwith banging a woman so hard a Triumph Herald falls apart?

Tarkovsky’s Stalker is a meditation on the alien both outside and inside us, a slow-paced exploration of how the human mind assimilates the truly inexplicable. Logan’s Run believes itself deep but is a cheap chase movie with a robot made of silver boxes. But Jenny Agutter wears a tiny see-though dress in Logan’s Run and Stalker is dull.

There’s very little that’s scary about a shark as long as you follow one simple rule: don’t go in the f**king sea. Whereas an Old English sheepdog that’s rampaging around the countryside, still growing unstoppably, with the whole British military facing off against it? Truly the stuff of nightmares.

In both films, an outsider who challenges authority is taught to conform. In both, the audience is forced to consider the violent costs of enforcing society’s laws. In the former it’s achieved by clamping eyelids open in front of footage of dental surgery; in the latter, Bill Murray makes out with a hot girl at camp. Which would you rather watch?

Glittery trainers, and other items of clothing that compensate for a dull personality 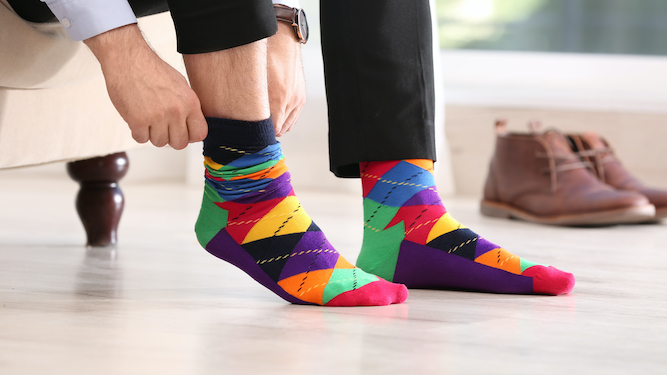 GOT a personality as interesting as dry Weetabix but want to convince the world you’re a wacky, free-spirited rebel? Try wearing these items:

There’s nothing like a garish sock for failing to fool others into thinking you’re a fun person to be around. Unfortunately, people rarely see your socks so you’ve wasted good money on pairs from somewhere ludicrously expensive like Sock Shop, when you could have bought six pairs for two quid from Tesco.

If you still think nose piercings are edgy, you’re either over the age of 80 or as dull as dishwater in all other areas of your life. When people see you with one they don’t think ‘Wow, what an interesting and unique person’, they think ‘Bet that’s as messy as f**k when she gets a cold’.

Only children can pull off glittery shoes, and therefore any adult wearing them should be presumed to have the same mental age as a seven-year-old. However, if you do manage to step out of the house without feeling like an immense twat, more power to you. Just don’t expect anyone else to think you look anything other than ridiculous.

It’s all very well wearing funky clothes but when you’re out and about people only see your coat, so it’s crucial to buy some outerwear that announces what an eccentric you are. Opting for a furry, neon number that makes you look like a cheap cuddly toy won at a fairground is an excellent way to detract from your utter charmlessness.

Do you think a waistcoat marks you out as an offbeat, unconventional kind of guy? It doesn’t. At best you’ll look like a hipster reject from Mumford & Sons, and at worst a washed-up 1980s snooker player. The majority of the population understand that waistcoats should only be worn, begrudgingly, at weddings, so don’t imagine that yours will lead anyone to think you’re a fascinating human being.