A PRIMATE starring in a Hollywood film sounds like box office gold that makes all other cinema redundant. But surprisingly, often that’s not the case:

The best of the ape movies because it has a driver’s mate orangutan called Clyde that punches people. Also Clint Eastwood was unable to choose between the 70s careers of trucker and bare-knuckle fighter. But it doesn’t feature Clyde as much as it should, ie. in every scene, nor does he get any dialogue.

The gorilla is big – like, really big – but he’s barely in it. Also he wasn’t a real gorilla. Idiots think it’s a cinematic classic. Don’t waste your time.

Ronald Reagan tries to teach a suicidal criminal chimpanzee that it can live a good, moral life, which as a premise is electrifying. But it’s just a basic screwball comedy where, as ever, the ape is underused. Though as it’s a 50s film he probably smokes in it.

Another jewel thief ape, the titular Dunston, who runs riot in a five-star hotel pushing people into cakes and giving massages. Has issues, but could have been a franchise to rival Mission Impossible. Bombed because people are stupid.

When you hear a title like that the imagination runs wild. Mist clears to reveal gorillas breakdancing, doing BMX tricks, playing in crazy bands and flying autogyros. What you actually get is a serious drama about poaching. Avoid.

Pleasingly high ape-to-screen ratio, entirely ruined by the apes first being men in suits and then turning out to be the baddies. Completely implausible.

The Tarzan bits are boring but there’s an incredible scene with Cheeta the chimp in a New York hotel room answering phones and breaking stuff. Sadly the Hays Code forbade a scene where he shat in his hands and flung it across the lobby, spattering Margaret Dumont, and the footage has since been lost. 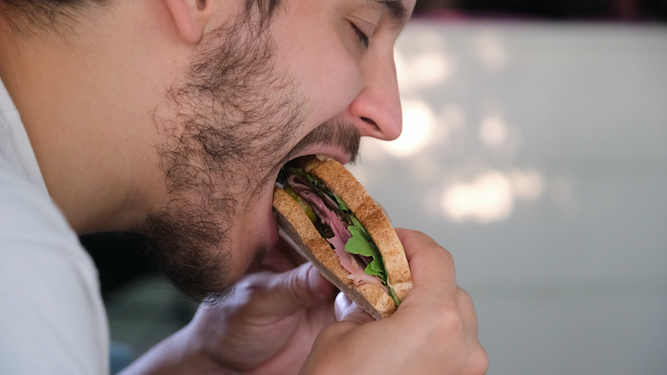 A MAN from Barnsley enjoyed a taste of life in the Big Apple as he ate a New York-style sandwich bought at his local Tesco Express.

Tom Booker felt as if he had been transported to the bustling streets of Manhattan when he purchased the deli-inspired pastrami on rye from the Huddersfield Road store and ate it in his car.

Booker said: “It was uncanny. I felt like I was in an episode of Friends or a Woody Allen film. I half expected to look out of the window and see a yellow cab and the Empire State Building, rather than a Royal Mail postbox and a branch of Home Bargains.

“To make the experience even more authentic, I got a meal deal and made a point of thanking the woman at the till for my potato chips and soda. I think she whispered ‘prick’ as I walked away, but that just added to my gritty New York experience. It’s what Travis Bickle would have said.

“After eating that sandwich, I wanted to ride a subway, order a cup of ‘cawfee’ and see a Broadway show. Unfortunately I had to pick my kid up from the leisure centre and take my gran to bingo, but from now on, like Jay-Z, I’ll be Brooklyn ’til I die.”