ANYONE would go a bit strange if surrounded by witless fans, hangers-on and yes-men. But these artists really went the extra mile with their unhinged beliefs.

Public Enemy’s Griff was big on vile anti-semitic conspiracies. ‘The Jews are wicked. And we can prove this,’ he claimed. Perhaps he had a special pair of callipers that measured wickedness. ‘Is it a coincidence that the Jews run the jewellery business, and it’s named jewellery?’ was another insight. Everything in that sentence is wrong, and a bit like claiming all blacksmiths were black.

Oh no, not lovely, creative, groundbreaking David Bowie, you’re thinking. Bad luck. He actually had quite a firm belief in witchcraft, and at one stage kept his urine in the fridge to stop witches stealing it. How that works is unclear. In his defence it may simply have been the result of taking vast amounts of cocaine. So that’s alright then.

Serious study of UFOs began in 1952 with the US Air Force’s Project Blue Book. Since then there hasn’t been credible evidence of a single alien spaceship, so it’s hard to see why Mr DeLonge is bothering to research the subject. Perhaps he ought to start with the question ‘Why are there no clear photos when everyone’s got a bloody camera phone?’

The singer of this much-hated band litters his music with religious references, but he isn’t a Christian, he’s on some vague spiritual journey that nonetheless involves God. This sort of self-centred, wishy-washy, intellectually vacuous spirituality is typical of our age, and actually more irritating than straightforward Christian nutters who love the idea of unbelievers being tortured forever in the Lake of Fire.

Page bought Boleskine House on Loch Ness, once owned by Aleister Crowley, because it was an occult hotspot where supernatural beings would manifest. Naturally when Page moved in, not one demon could be arsed to pop round. It’s not even something you could sue the estate agent over: ‘I was hoping to be plagued by creatures of pure evil which to someone sane clearly don’t exist.‘

It’s dodgy to mock Ye because he obviously has mental health issues, but f**k it. He also suffers from a self-belief problem, frequently describing himself as a genius or his music as ‘perfect’. As he puts it: ‘My greatest pain in life is that I will never be able to see myself perform live.’ However it’s hard to feel genuine contempt for someone who comes out with comedy gold like: ‘Humbly, I would say I’m the most influential person in footwear right now.’

'Cottagecore', and other weird as f**k things young people are into these days 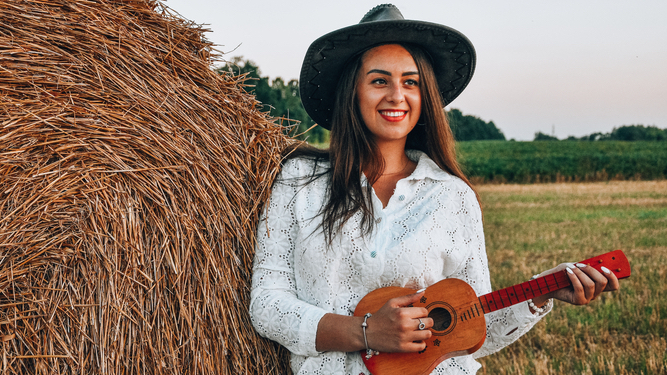 IN your day there were just chavs and goths but now teenagers are into all sorts of strange shit. Here are some of the weirdest.

If Gen Z can take something utterly mundane and make a pointless statement out of it, they will. Cottagecore is about fetishising an imagined country lifestyle by doing stuff your grandparents supposedly did, like crafting lace doilies and making jam. It’s not very authentic, or they’d be worrying about potato blight and polio.

Want to feel old? Well, young people are treating the year 2000 as if it’s a vintage era from the olden days and adopting its fashions. If you see someone wearing a velour tracksuit or a pleated skirt, you’re the idiot for laughing at them because it’s currently the cutting the edge of style.

This style is based around a muted colour palette of brown, burgundy and black, and features clothes like tweed blazers, waistcoats and smart shoes, all mixed with a general air of romanticised misery. It’s essentially dressing like a geography teacher, but if the geography teacher was suicidally depressed and in a weird sex cult.

It’s hard to know if Gen Z is just taking the piss, but normcore is based on ‘reclaiming’ normal clothes, which is the average middle-aged person’s wardrobe. The plainer your outfit is, the more stylish you are. Unless you’re over 25, in which case you’re just boring. You’re right, it makes f**k all sense. And the joke will be on them when they discover they unironically love their all-social-situations blazer and slightly stretchy jeans.

They’re definitely taking the piss with this because they haven’t even bothered renaming it. They’ve just pinched it wholesale, and it’s exactly the same as in the 90s: plaid, boots, choker necklaces, the works. And they don’t give a shit that you were there the first time round, because that means you’re so old that you might as well be dead. Like Kurt, who they may not have heard of.