IN denial about your age? Make sure you’ve got painkillers to hand, because this list of quarter-century old songs will get your back playing up:

While it’s sad to think that Kurt Cobain would be 53 now, it’s tragic that grunge should be a staple of Steve Wright’s Non-Stop Oldies on Radio 2. Kurt died so we could have mortgages, 55” flatscreens and Volvo SUVs.

If this Irish alt-folk bullshit sounds fresh to you, you went stale a long time ago. To your credit you’ve lingered and got to the age where each new year gained is a genuine achievement. Now go put some Voltarol on that broken heart.

It’s bone-chilling to realise all the modern female artists sounding like Alanis are three decades removed from her, born of bitter sex-with-an-ex hook-ups to the sound of Jagged Little Pill. Grandmothers sing along to these vengeful tales of being f**ked over.

Ah, you were a cynical student who mocked it. But you’re as far from Whigfield now as you were from The Beatles back then, and now you do the dance with your middle-aged mates as if you were never disdainful. If the air is getting hot these days, it’s probably a menopausal hot flush.

Breakfast at Tiffany’s – Deep Blue Something

God, remember the deep shame you felt as a teenager when your mum sang along to this in the kitchen and did a little dance like she was young? That’s your kids now when you say ‘I quite like this new Coldplay one’ and sashay your hips.

25 years. 25 years off one song and one I’m A Celebrity, and Peter Andre is still famous. You’ve got to hand it to the f**ker. Your boyfriend from back then’s had a hair transplant.

Scottish independence to be decided by tonight's football result 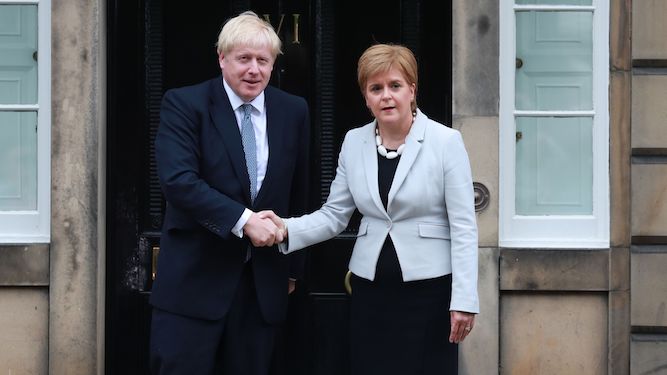 THE question of Scottish independence will be decided not by referendum but by the result of tonight’s England-Scotland result, it has emerged.

Prime minister Boris Johnson, who proposed the wager to Nicola Sturgeon yesterday, promised that if Scotland win they will be granted immediate independence but if England triumph independence is off the table until 2051.

Scotland secretary Alister Jack said: “Group stages can be a bit purposeless, so the boss decided to spice things up by putting the 1707 Acts of Union on the line.

“If England can link through Jack Grealish to Harry Kane, then it’s another 20 years of oppressive Sassenach rule for the Scots. If Scotland manage an unlikely win they can build a new Hadrian’s Wall and rejoin the EU. It really is all to play for.”

Scotland captain Andy Robertson said: “The pressure’s on but if we keep up our press, control the midfield and look to hit them on the counter we could end centuries of rule by posh English wankers.

“In the event of a draw we’ll go to penalties to put this to bed once and for all. Using England’s inability to win a shoot-out to short-circuit democratic process. What a perfect goodbye.”