STEPHEN Malley’s portrayal of the innkeeper in his school’s Nativity play will smash existing preconceptions of the role, according to him and his mum.

Six-year-old St Mary’s C of E Primary School pupil Malley, whose previous roles include a toadstool in Alice in Wonderland, has immersed himself in his portrayal of the unhelpful hostelry owner.

He said: “Prepare to have everything you thought you knew about the innkeeper turned on its head.

“Despite only having two lines, his emotional engine is incredibly complex. Ostensibly he doesn’t want to let Mary and Joseph in, but inside he’s torn.

“I think Mary reminds him of his own estranged daughter, who is perhaps called Judith. He wants to connect with her, to make amends for past mistakes, but his inner demons are overpowering.

“There’s a lot of subtext at work there, and I will be bringing that sublety to the fore.”

Despite his young age, Malley has already been tipped for stardom by his mum.

Andrea Malley said: “Initially, when the Nativity play casting was announced, we were disappointed because the innkeeper is a relatively small part and he definitely could’ve played Joseph.

“And obviously the only reason Tom Logan got to be Joseph is that his mother is on the PTA.

“But they’ll see. Stephen will be to the innkeeper what Harvey Keitel was to Bad Lieutenant.”

Stephen Malley said: “There’s two shows and a matinee, so I have to be physically as well as mentally at the top of my game.”

Banksy defaces Banksy with another Banksy 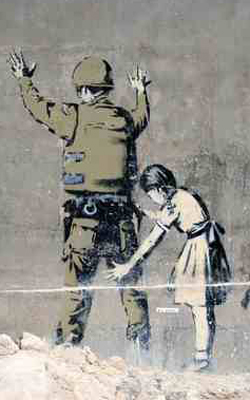 CONTROVERSIAL GCSE-level urban artist Bansky has struck again, this time defacing a valuable Banksy mural in London, knocking tens of thousands of pounds from its value.

The artwork – depicting a policeman dressed in a gimp outfit being led around on a leash by the Queen, or similar – was valued at something in the region of £250,000.

But thanks to Banksy’s thoughtless vandalism, it is now worthless.

Matters are confused still further by the fact that Banksy defaced the priceless Banksy with another Banksy, which depicts a tiny Banksy defacing an even smaller Banksy.

“Either Bansky improves the existing Banksy by creating a new Banksy on top of the Banksy of Banksy defacing a tiny Bansky which was sprayed onto the original Banksy, or  a team of conservators works around the clock, restoring the piece for the nation.”

“If the latter, who knows how long it will take to restore this important statement and its painfully simplistic, risibly adolescent anti-authoritarian message to its original lustre?”

“I’m guessing about three minutes, given the right stencils.”