So what really happened at the climax of Parade's End?

BRITAIN is buzzing with theories about how Sherlock Holmes appeared to be dancing at the climax of Parade’s End.

The gripping storyline ended with Holmes seemingly surviving the First World War trenches only for him to reappear moments later with a woman in front of a fireplace.

Tom Logan, an avid man from Finsbury Park, said: “Sherlock had gone undercover as a jerry and carefully inserted a blank bullet into a machine gun.

“He then burrowed his way back under no-man’s land and counted the number of shots before he got out of the trench.

“Therefore he was able to pretend to be killed and get on a train to London while Watson was distracted by a witty remark made by a feisty suffragette.”

Helen Archer, from Peterborough, added: “He would have been hiding behind a tree, but it had already been chopped down by that bitch Sylvia. 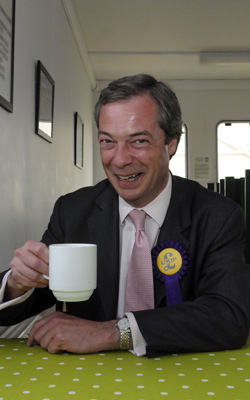 WITH opinion polls placing UKIP as the UKs third most popular political party, their leader Nigel Farage has hastily made up some policies over dinner.

He told passers-by: I have in my hand a two-ply piece of paper. With this Policy Napkin we will wipe the cranberry sauce of failure from the chin of Britain.

The flaccid document states that schools should no longer teach the Roman or Norman conquests of Britain, concentrating instead on “times we beat the French or Germans”.

Also according to the napkin, if UKIP are elected the NHS will only treat diseases with British names.  Parkinsons sufferers will still be cared for, but hospitals will not treat foreign-sounding illnesses like CreutzfeldtJakob disease.

The napkin promises to abandon the metric system for new measurements named after British icons.  Length will be measured in Churchills, with one Churchill equal in length to Nigel Farages forearm.

Longer distances will be measured in Spitfires, which will equal the distance between Mr Farages house and his nearest WH Smiths.

Similarly, weight will be gauged in Bothams.  A Botham will be defined by the weight of potatoes Nigel Farage can lift above his head without breaking into a sweat.

Other policies include compulsory morris dancing for the under 20s, funding for a new series of Lovejoy, and the banning of pasta.

The final policy on the napkin was thought to address welfare reform, but was later found to be gravy.