Stars In Their Eyes, and other TV shows that might have been a bad dream

IT can be disorientating trying to recall a dream, but it’s worse when you realise that the dream was actually a real TV show. Here are the oddest:

Stars In Their Eyes

Witnessing a meek accountant from Swansea walk through a smoky doorway and magically become a shop-soiled Robbie Williams is definitely the sort of thing that only happens in a dream, right? Not if you were watching ITV in the 90s. That was our bizarre reality.

You must have been asleep on the sofa. There’s no way you could have watched a programme where children are screamed at and covered in gunk by two grown men, and sometimes Ian Beale from Eastenders, broadcast live at 9am on a Saturday morning. It’s too weird to have been real.

The horrible combination of snooker and Jim Davidson is something only your subconscious could throw up. Factor in the nonsensical but sinister phrase ‘I’m going to be snookering you tonight’ and you’ve got the makings of a very creepy dream. Except you were awake and it was on every Saturday night for a decade.

Clearly an anxiety dream and not a real show. Who in their right mind would go on TV, reveal their entire naked body apart from their head, and have their genitals forensically examined by a stranger, an overexcited host and a viewing audience of millions? Only a particularly deep REM cycle could create that freakish situation, surely?

So there’s this woman who pretends to be a doctor, right, who makes people put every single item of food they eat during a week on a massive table while she shames them for it. And then she makes them poo in a Tupperware box and give it to her so she can sniff it. No one would put something that mental on TV, so it must have been a particularly f**ked up nightmare. 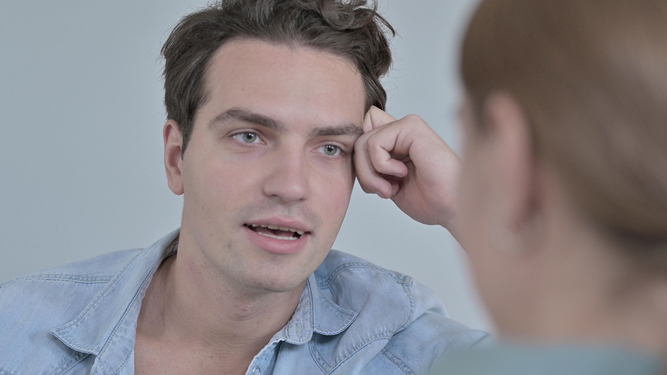 INNOCENTLY giving the wrong answer to the woman in your life may scupper your chances of ever getting laid again. Here are the right – and totally wrong – responses to six key queries.

Should I get this new dress?

This one always leaves you nonplussed – she’s already got a f**king wardrobe full of clothes so why does she need more? The correct response, of course, is ‘Definitely, it would look even better on you than on that model’. She’s probably already ordered it before even asking your opinion, so go with the flow.

Should I increase my hours?

Everyone is feeling the pinch, so what a good idea! But beware – her heroically asking is purely rhetorical and a ‘yes’ could be a prelude to a list of all the ‘unpaid f**king slavery’ she currently does around the house. You’ll be on the washing, ironing and cleaning rota before you can blink.

Shall we visit my parents this weekend?

No way. The footie’s on and Sunday is for the pub with your mates. Besides, you’re not even related, genetically speaking, to your in-laws. None of this will wash, so spinelessly reply ‘That would be lovely, we haven’t seen them lately, have we?’ Then mentally prepare yourself for their barely-concealed disappointment that you’re not the obscenely-salaried wanker their daughter deserves.

It’s pretty bland as always, to tell the truth. But stick with the ‘Delicious, you’re such a great cook’ fib, which condemns you to dull food in perpetuity but gets you out of having to bother to cack-handedly attempt any kind of culinary creativity yourself.

Did you remember to send a birthday card to your mum?

Obviously not, you had no idea it was her birthday. But say ‘yes’ and make a mental note to get one and post it on your lunch break tomorrow. Then forget to do it and claim it got lost in the post. It didn’t work last year, but it’s your only option and it might be second time lucky.

Can I borrow your car?

You came out in a cold sweat by the word ‘borrow’ because you knew what was coming, and already had a terrifying mental image of her shunting another vehicle while adjusting her make-up in the rear view mirror. The fact she’s never had an accident in her life, and is actually a much better driver than you, doesn’t figure. Tell her ‘no problem’ but dig out the insurance documents the minute she picks up the keys, just in case.