Sting's Next Album Will Be 'Just Awful' Critics Predict

STING'S next album has been panned by critics more than two years before he is due to start recording it.

Carl Shurz, chief reviewer of rock bible Twang, said the album would probably be called something stupid like Comanche Scallops and sound like 'a cow giving birth next to the M25'.

Einar Gilkyson, writing in the German jazz magazine Fahrtz, described it as 'an impending crime against humanity' and predicted the largest ensemble of badly tuned lutes in musical history.

Shurz said: "At Twang we don't normally give an album a terrible review until it has at least been recorded.

"But as soon as I heard that Sting was even thinking of making another record, I felt compelled to review it as quickly and as badly as possible."

He said the opening track, probably called something vacuous like Love Mussel, would most likely be a disgusting, free jazz workout featuring Sting on the lyre and Winton Marsalis on the alto euphonium.

"I expect to be physically sick." 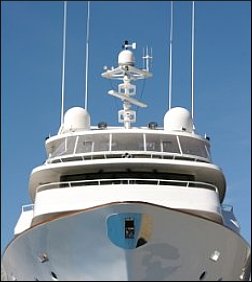 THE Office of the Rail Regulator is to use the record £14m fine imposed on Network Rail to buy a gigantic motor yacht.

Officials say they have their eye on the 140ft, 12-berth Azura 2000, currently anchored in Palma and on sale for offers over £12.2 million.

The French-built Azura features crew quarters, a gourmet kitchen, a 22 seat cinema and a harpoon.

But Roy Hobbs, deputy director at the ORR, said: "Don't get me wrong, it's a lovely boat, but as I keep pointing out, it does not have a helicopter landing pad.

"I've been lobbying for the Calypso Dream, a 180ft beauty with a pool, a virtual driving range and a fleet of little submarines.

"It's bang-on the 14 mil and is just sitting there in Naples waiting to be picked up." He added: "It used to be owned by Benny Hill."