WAY back in '73 I was a wild, young buck and the world was only just coming to terms with the fact that it was going to be another 27 years before the fascist Bush dictatorship would come to power, and that it would ultimately take artists with a conscience such as myself to bring him and his so-called democracy to it's knees and rid the world of famine, war and disease. I was on my 'gap year' as you English call it, taking time out from UCLA where I was studying the Systematic Slaughter of Native Americans By Texas Oil Barons And The CIA. It was a cool course, but I felt I had another calling, which is why I decided to rail against everything my parents were stood for and stowed away on a Boeing 707 flight bound for Paris. Despite the fact my imperialist father bought me an open plane ticket, gave me a thousand dollars in spending money, and mom packed me my favourite peanut butter and jelly sandwiches, I was still railing against everything they stood for and sticking it to the man.

As I stepped off the plane, I breathed in the air – it smelt good, it smelt of change, it smelt of revolution. And aviation fuel, which I’m allergic to – yet another product of the Texan, Kennedy-murdering mafia. I checked into the Raphael, a modest five star hotel, and set out onto the streets to join my brothers and shout at the top of my voice – Vive Le Revolution!

I spoke to this guy in one of their bourgeois asshole cafes, who said that I should've been here during the riots in 1968. I wasn't going to let the fact that I was five years late put me off. I learnt from studying freedom fighters such as Bader Meinhof and the Red Brigade, that there's no substitute for direct action and left without paying for my croissant. I also stole at least three sugar cubes. So fuck them.

It must have been on the third day that I stumbled upon some weird sport they play out here. There were these guys dressed as penguins picking up buckets of water and carrying them onto some kind of merry-go-round thing. Then, when they got across, they tipped the water into these big plastic cylinders which turned the water a different colour. Weird. Then there were the women, who also carried buckets of water, but this time across some giant greased-up conveyor belt. They were dressed in 17th Century low-cut peasant woman costumes. More evidence of the West’s outdated, sexist, misogynistic dogma.

There were TV cameras there, and this guy dressed in a Union Jack suit was presenting the show. As soon as I saw that asshole flag, I knew. I knew this wasn't simply 'Jeux Sans Frontieres', an innocent, knockabout piece of family entertainment, to be shown in the early evening slot, just after the regional news. No, this was another chance for the fascist media moguls, who are in the pockets of the military industrial complex, who are themselves in the pockets of the freemasons – this was another chance for them to fly their goddamn flags in the people's faces, and say 'we're in charge, so bow and kiss our fat asses'.

The tournament was won by the Cambridgeshire town of Ely. Afterwards, Eddie Waring and myself went for Chinese food and then stripped to the waist and boxed until dawn. 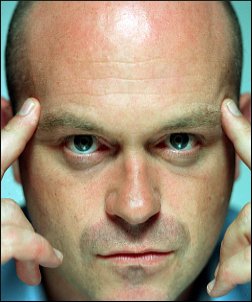 THE BBC has unveiled plans for a three-part mini series based on this morning's earthquake in Lincolnshire. Kemp is one of Britain's favourite pretend hardmen

Starring Ross Kemp, as Kenny Ross, a troubled, Iraq war veteran, the £200 million production will be the centrepiece of the corporation's summer schedules.

A BBC spokesman said: "Everyone remembers where they were when they heard about the Lincolnshire earthquake.

"Families were torn apart and some the county's best chimneys were ruined. This amazing production will explore the heart-wrenching human dramas which will hopefully emerge sometime later today."

As the quake hits Market Rasen, Kemp's character is seen drinking vodka from the bottle and looking at photos of old comrades from Basra.

He then begins an incident-packed, 45-minute journey to the centre of Grimsby where he helps lift some bricks off an old man's legs.