Teletubbies, and other horrifying entities you just accepted as a child

CHILDREN are very accepting, which is generally a positive thing. However, it also means we allowed some truly monstrous creations into our lives as kids, like these.

We all loved Rainbow, but serious questions needed to be asked about Zippy. George and Bungle were clearly a hippo and a bear respectively, yet Zippy was some sort of indeterminate orange orb of chaos with a zippable mouth that added an unnecessary gimp mask vibe to children’s TV. But did that stop you from lapping up Zippy’s nonsense? Absolutely not.

It’s amazing how, as a child, you just rolled with the concept of four multi-coloured cretins living in a burrow who had televisions for abdomens. Not once did you ask yourself obvious questions like, how do they digest food? Why do they worship a sun baby? Are they on drugs? Am I?

Springing from what must be the nadir of popular culture, Noel’s House Party, Mr Blobby soon outshone Mr Edmonds, making regular appearances on Live & Kicking and even beating Take That to number one. The fact that he was a chaotic, clumsy nightmare in the manner of an overgrown toddler is probably what endeared him to children of a young age.

Emu was a huge, aggressive bird puppet which attacked an impressively wide variety of celebrities over the years, including Michael Parkinson, Richard Pryor and Snoop Dogg, and only stopped when Rod Hull died in 1999. However, rather than give you a fear of birds, or indeed men pretending to be birds, you thought it was hilarious.

If somebody sat you down and pitched you an idea for a television show featuring two massive sentient bananas dressed in matching nightwear you’d rightly worry about their mental health. Yet, as a four-year-old, you couldn’t get enough of those two terrifying pricks and their inane, witless antics.

The six worst types of people to watch TV with 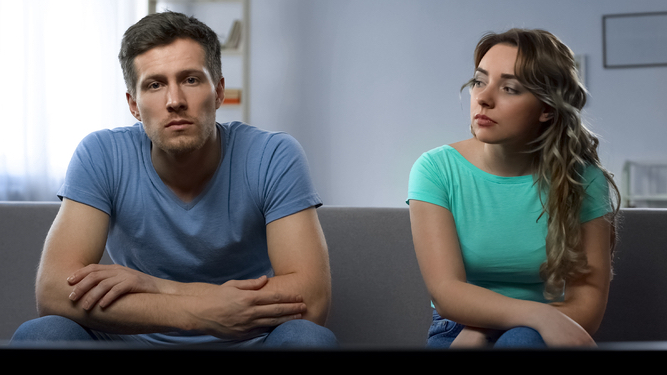 WATCHING TV should be an opportunity to relax into mindless, slack-jawed oblivion, but that’s difficult if you’re sat next to one of these irritating knobheads.

This person spews forth a constant barrage of inane witterings, usually at moments that are crucial to understanding the plot. If they aren’t wondering where they’ve seen that actor before, they’re talking you drearily through their day and paying no attention to what’s happening on screen. Tell them to shut up or piss off.

Is it really necessary to know the age, marital status, and previous work of every single actor in the show? Is it vital to cross-reference IMDb pages to find out if the second assistant producer was the same as in the film you watched yesterday? No. It just ruins everyone else’s enjoyment of what would otherwise be a moderately entertaining way to switch off after a hard day.

As soon as the film begins they drift off, only to wake up 40 minutes later demanding a scene-by-scene recap of what they have missed. After you’ve finished regurgitating the plot and they’ve asked ‘Who’s that?’ 17 times, they’ll fall asleep again, rendering all your explanations pointless.

This person gets a big kick from pointing out continuity errors and anachronisms because it makes them feel clever. It will be even worse if they have a special interest in a particular period of history and you have to listen to them bang on about how the hansom cab wasn’t actually used in New York until after 1882 while trying to enjoy the sexy bits in The Gilded Age.

Whether they’re constantly checking their phone, jiggling their legs or shovelling crisps into their face, this person is a huge source of irritation. There’s only so long you can put up with someone clipping their toenails in your peripheral vision until you lose your shit and tell them to bugger off to the bathroom. At which point the fidgeter will ask you to rewind the last bit as they missed it due to you being a grumpy f**ker.